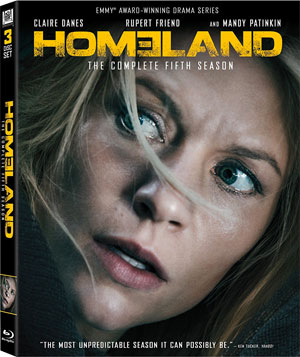 Twentieth Century Fox Home Entertainment has unveiled information about the upcoming release of the fifth season of Homeland, bringing the acclaimed television show to Blu-Ray Disc and DVD in January.

Now working at a private security firm in Berlin, Carrie (Claire Danes) is trying to start a new life, but she soon discovers she can’t escape her past. Blindsided by stunning betrayals, and without Saul (Mandy Patinkin) and Quinn (Rupert Friend) to rely on, Carrie must uncover a deadly conspiracy that puts thousands of lives at risk, including her own.

The release also contains a pair of featurettes as supplements, giving viewers a deeper look behind the scenes and the production of the show.

”The Evolution of Carrie Mathison” takes a look back at the key events in Carrie’s journey throughout the past five seasons, her relationships and the often time tragic moments she’s experienced have changed her, hardened her and helped her grow

“‘Homeland’ In Berlin: Beyond the Wall” touches upon some of the controversial topics covered in the show. Get an inside look at why the writers took on these themes, what stance the characters are taking, and the role of the City of Berlin