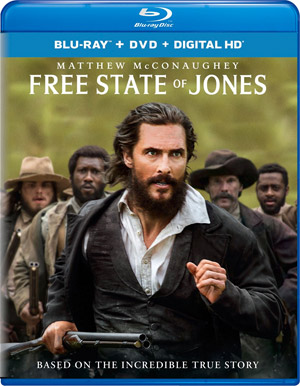 Universal Pictures Home Entertainment has recently announced the upcoming release of Free State of Jones, bringing the drama to Blu-Ray Disc and DVD in September.

Oscar® winner Matthew McConaughey stars in this epic, untold true story of defiant Southern farmer, Newt Knight and his extraordinary armed rebellion against the Confederacy during the Civil War.  Despite overwhelming odds, Knight banded together with other small farmers and local slaves and launched an uprising that led Jones County, Mississippi to secede from the Confederacy, creating a Free State of Jones.

The release will feature the movie, as well as the Featurette ”The History of Jones County” as its sole bonus feature.