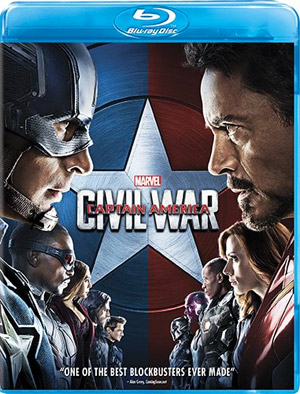 Marvel Entertainment has recently unveiled details about the upcoming release of Captain America: Civil War, bringing the latest blockbuster installment in the franchise to DVD and Blu-Ray Disc in September.

On DVD, the release will be a bare-bones affair, offering not a single bonus feature. Fortunately for fans of the film, the Blu-Ray version fares a lot better, offering up over 60 minutes worth of supplements, such as United We Stand, Divided We Fall, a Making-of look at the film in two parts. As the tension mounts, sides are chosen and lines drawn. Learn more about the characters on each side—from Captain America and Iron Man to the latest recruits. In this complete behind-the-scenes look at a landmark in the Marvel saga, we’ll examine their stories through exclusive footage and interviews and discover just what went into selecting the Super Hero teams, filming the epic action sequences and introducing Black Panther and Spider-Man to the MCU.

Next up is Iron Man: The Road to Civil War, taking you from Gulmira to Sokovia, allowing you to delve into the development and evolution of one of the most iconic characters in the Marvel Cinematic Universe.
A Gag Reel is also included on the release, as well as a string of Deleted & Extended Scenes.

A Commentary Track with Directors Anthony and Joe Russo and screenwriters Christopher Markus and Stephen McFeely deliver scene-by-scene insight and explain the storytelling challenges they faced creating the third installment of the Captain America franchise.

The release is rounded out by an Exclusive Sneak Peek at the upcoming Marvel movie, Doctor Strange, starring Benedict Cumberbatch, which will come to theaters in November.