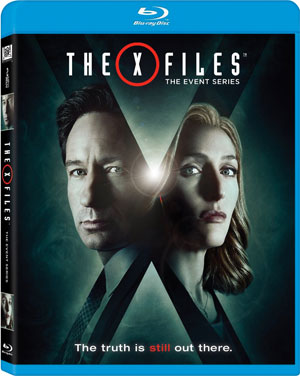 Twentieth Century Fox Home Entertainment has just announced the upcoming release of The X-Files: The Event Series, the new six-episode event that ran on television earlier this year, bringing it to DVD and Blu-Ray Disc in June.

Almost 14 years after the original series run, the next mind-bending chapter of “The X-Files” is a thrilling, six-episode event series from creator/executive producer Chris Carter, with stars David Duchovny and Gillian Anderson reinhabiting their roles as iconic FBI agents Fox Mulder and Dana Scully. Mitch Pileggi also returns as FBI Assistant Director Walter Skinner, Mulder and Scully’s boss, who walks a fine line between loyalty to these investigators and accountability to his superiors.

The release will include Deleted & Extended Scenes, as well as a Gag Reel. The Featurettes ”The Makings of a Struggle” and ”Season X: An In-Depth Behind-the-Scenes Look at “The Event Series” will also be included on the release.

Monsters of the Week is a recap of the Wildest and Scariest from the Original Series, while “The X-Files” – Green Production PSA and the short film ”Grace” by Karen Nielsen
Commentary on “Founder’s Mutation” with Chris Carter and James Wong will also be included.