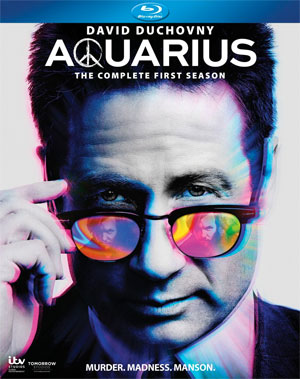 Anchor Bay Entertainment has added Aquarisu to its line-up, bringing the NBC television show starring David Duchovny to DVD and Blu-RayDisc in September.

Los Angeles, 1967. Welcome to the Summer of Love. “Aquarius” stars David Duchovny as Sam Hodiak, a seasoned homicide detective whose investigations dovetail with the activities of real-life cult leader Charles Manson in the years before he masterminded the most notorious killings of a generation, the Tate-LaBianca murders. A small-time but charismatic leader with big plans, Manson has begun to build up his “family”, recruiting vulnerable young men and women to join his cause. Teaming up with a young cop who will help him infiltrate Manson’s circle, Hodiak is forced to see things through the questioning eyes of someone who came of age amongst the current anti-establishment counterculture. Edgy, addictive and visually stunning, the Age of Aquarius is here.

“Aquarius” is a sprawling work of historical fiction that begins two years before the 1969 Tate-LaBianca murders. It’s a shocking thriller, a nuanced character drama and, in the end, the story of how we became who we are today.

The DVD and Blu-Ray versions will feature all episodes from the show’s first season, each of them presented as exclusive extended versions with never-before-seen additional footage. The release will also include bonus features, such as Webisodes and a “First Look: Aquarius” featurette.