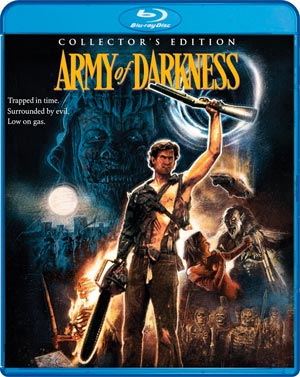 We all know that Shout! Factory is the #1 provider for classic horror movies, giving them the treatment you never thought were possible. Now, the studio has directed its eyes towards Sam Raimi’s Army of Darkness, bringing it to Blu-Ray Disc as a Collector’s Edition in October.

Back to do battle with the hideous “Deadites,” Bruce Campbell returns to the role of Ash, the handsome, shotgun-toting, chainsaw-armed department store clerk from S-Mart’s housewares division. Demonic forces time warp him – and his ’73 Oldsmobile – into England’s Dark Ages, where he romances a beauty (Embeth Davidtz) and faces legions of the undead. Can Ash save the living from the evil dead, rescue his girlfriend, and get back to his own time?

This Special 3-Disc Blu-ray Set features Four Versions of this outrageously hilarious third chapter of Evil Dead Trilogy, including the Theatrical Cut of the film, the Director’s Cut with 15 minutes of extra footage, the International Cut and the TV version in standard definition.

Here is a break-down of the release for you, by disc.