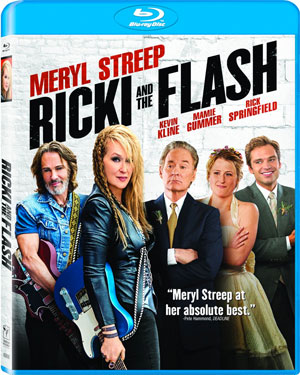 Sony Pictures Home Entertainment has just added Ricki and the Flash to its release line-up, scheduling Jonathan Demme’s rock’n roll drama for release on Blu-Ray Disc and DVD in November.

Meryl Streep as you have never seen her before, a hard-rocking singer & guitarist, in “Ricki and the Flash,” an original and electrifying film loaded with live musical performances. Streep stars as Ricki Rendazzo, a guitar heroine who made a world of mistakes as she followed her dreams of rock-and-roll stardom. Returning home, Ricki gets a shot at redemption and a chance to make things right as she faces the music with her family.

Also starring Kevin Kline, Mamie Gummer, Sebastian Stan
and Rick Springfield, the DVD release will also include the Featurette ”Getting Ready for Ricki: The Making of Ricki and the Flash”, in which the cast and crew walk through creating a rock goddess and finding the heart of the story.

On Blu-Ray you will also find a selection Deleted Scenes, the Featurette ”Rediscovering Rick Springfield” and a Cast Photo Gallery.