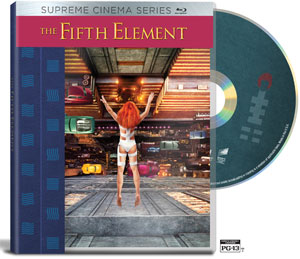 Those of you who recall Sony’s “Superbit” DVD releases, will find the concept of Sony Pictures’ upcoming Supreme Cinema Series vaguely familiar. Starting the product line with new Blu-Ray releases of The Fifth Element and Léon: The Professional, the idea is to present movies in the best possible presentation quality, with remastered high end video transfers and the best possible audio presentation. How will Sony achieve this? The films will be presented in brand new video transfers taken from all-new 4K restored masters. We’re talking really high resolution, source material here. In addition, each film will be accompanied by a Dolby Atmos audio track presentation that also represents the bleeding edge of home entertainment audio technology. Instead of providing a track that has been down-mixed and encoded previously, Dolby Atmos tracks contain the original audio elements themselves with information where they need to be placed in 3D audio space. This allows for on-the-fly mixes without losing any fidelity and makes handling complex streams much easier to accommodate with all their transparency intact.

In The Fifth Element, New York cab driver Korben Dallas (Bruce Willis) didn’t mean to be a hero, but he just picked up the kind of fare that only comes along every five thousand years:  A perfect beauty, a perfect being, a perfect weapon (Milla Jovovich). Together, they must save the world. Bruce Willis, Milla Jovovich, and Gary Oldman star in acclaimed director Luc Besson’s outrageous sci-fi adventure, an extravagantly styled tale of good against evil set in an unbelievable twenty-third century world. 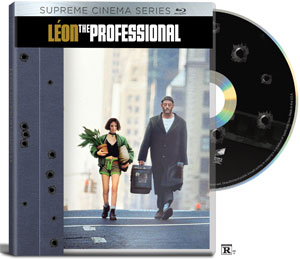 Jean Reno, Gary Oldman, Natalie Portman and Danny Aiello star in Léon: The Professional, a go-for-broke thriller about a professional assassin whose work becomes dangerously personal. Calling himself a “cleaner,” the mysterious Léon (Jean Reno) is New York’s top hitman. When his next-door neighbors are murdered, Léon becomes the unwilling guardian of the family’s sole survivor – 12-year-old Mathilda (Natalie Portman). But Mathilda doesn’t just want protection; she wants revenge. Training her in the deadly tricks of his trade, Léon helps her track the psychotic agent (Gary Oldman) who murdered her family.

Both the theatrical and extended versions of the film will be included on the release, both remastered in 4K and with Dolby Atmos. In addition, you will find the Featurettes “Cast and Crew Look Back,” “Jean Reno: The Road to Léon,” “Natalie Portman: Starting Young” and the Original Theatrical Trailer.

Both releases will be presented in a Limited Edition Acrylic “Clear Case” with 24-Page Behind-the-Scenes Booklet.

“The Fifth Element” and “Léon: The Professional” will arrive in stores on October 27. No suggested retail price has been announced at this time.