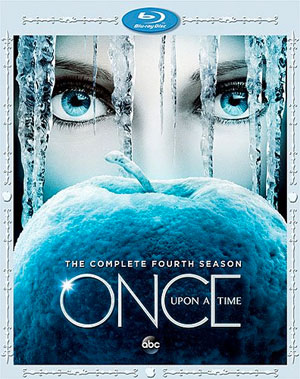 ABC Studios and Walt Disney Home Entertainment have just added Once Upon A Time: The Complete Fourth Season to their line-up, scheduling the magical TV show for release on Blu-Ray Disc and DVD in August.

Love. As seductive and dangerous as magic, this potent, unpredictable force proves to be the ultimate weapon in the epic battle between good and evil in ABC’s Once Upon a Time: The Complete Fourth Season.

Soon after Emma and Hook unwittingly bring Elsa of Arendelle to Storybrooke, they  encounter the mysterious Snow Queen, whose relentless obsession with both Emma and Elsa has chilling consequences. Meanwhile, it appears Regina has at last found true love with Robin Hood, but how will she react when her happy ending is thwarted yet again by a maddening twist of fate? Then, a banished Rumplestiltskin enlists the Queens of Darkness (Maleficent, Ursula, Cruella De Vil) in an insidious scheme to rewrite their own endings and corrupt the Savior by turning her newly blissful heart pitch-black.

The release will feature all 23 episodes form the show’s fourth season, as well as a number of bonus materials. Among these special features is the Featurette ”Defrosting Frozen”, discussing the arctic blast that hit Storybrooke this year as the characters from “Frozen” and “The Snow Queen” took over the first half of the season.  Defrost this 12 episode event with interviews with the actors who played Anna, Elsa, Kristoff and Snow Queen and for the first time in forever, explore how Disney Animation’s blockbuster film was adapted for the small screen.

In ”Behind the Magic Tour”, join hosts Josh Dallas and Ginnifer Goodwin as they take you on an exclusive back stage tour on the stages of “Once Upon A Time.”  See the sets, meet the crew and eat the food as we go behind the scenes and find out what makes “Once Upon A Time” the most magical show on television.

The Featurette ”Three Who Stayed” gives you the chance to meet three residents of Storybrooke who decided to stay in Storybrooke after the ice wall came down.

The release will also contain Bloopers and Deleted SCenes, as well as Commentary Tracks on some of the episodes.