One of the more intriguing shows on the abc network has been “Once Upon A Time” for the past years. Unlike its ugly, sloppy and seriously flawed simulacrum “Grimm” on NBC, “Once Upon A Time” has very quickly caught my imagination with its main premise, in which fairy tale characters are being transported from a parallel universe to our world, where they live ordinary lives. At least that was the premise when the show originally started, and since then a lot has changed and no one would speak of ordinary lives when it comes to the folks living in Storybrook.

Season 3 of the show picks up exactly where the previous season left off. Henry has been kidnapped by Peter Pan and taken to Neverland. Instantly, Emma and the rest of the family travel to Neverland as well to rescue the young boy from the clutches of Pan, but they quickly learn that despite his deceptively young appearance, Peter Pan is a formidable opponent.

But rescuing Henry alone does not solve their problems, upon returning to Storybrook, Pan follows them and begins to systematically undermine and dismantle the peace within the community.

But Pan is not the only troublemaker this season. Once the good folks of Storybrook have taken care of him, they finally find a way to break the Evil Witch’s curse and return to the Enchanted Forest, but as they get there things are not as they should be. Someone had made a home in the Evil Witch’s castle and cast a protective spell around it.

Meanwhile, Emma and Henry are living a charmed life in New York without any recollection of the past events when suddenly Hook comes for a visit. With the help of a magic potion he is able to bring back Emma’s memories, telling her that another curse has been enacted: all the fairy tale characters have been returned to Storybrook once again with all their memories of the past year missing! 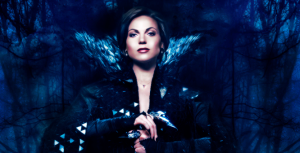 The strength of “Once Upon A Time” really lies in its storytelling. The way character traits and personalities carry across from the fairy tales to the real world, and how it creates moments of wickedly comical interaction and situational comedy.

The main cadre of the cast is returning once again, of course, but in this season a good number of new characters make an appearance. Since most of the first half of the season is taking place in Neverland the majority of the story revolves around these main characters, giving very little presence to the figures left in Storybrook. It changes once things return to the small town, adding new personalities to the mix and keeping things fresh with some of the main charcaters questioning their own motives—or having them question and examined by the others.

Witty dialogues—Robert Carlyle is still taking the cake as both Mr. Gold and Rumpelstiltskin—keep the show entertaining while the plot devices and twists keep it interesting and leave you wanting for more, and this season in particular is rollicking and moving at a furious speed, making it perhaps the best season so far. Even the visual effects have improved—not by much, but at least the nasty blurred matte lines in the blue screen shots have disappeared. Overall VFX are still mediocre at best, breaking the illusion at times, but in the overall scheme of things, it is not all that bad. Perhaps abc can set aside some additional budget for better effects work in future seasons.

On five discs, abc Home Entertainment is presenting all 22 episodes of the show’s fourth season on this Blu-Ray release. The image quality os very good throughout, without blemishes or defects. The compression is generally good, but some slight banding artifact are evident at times in areas where gradients should fall off very smoothly. Nothing to fuss about, really, but worth noting.
The transfer presents the show in its 1.78:1 widescreen aspect ration that exhibits an incredible level of detail. The production, rich in color and detail to begin with, looks marvelous to say the least, bringing to life the hues and richness of the show in every frame. Solid black levels give the transfer depth that adds to the appeal of the show. 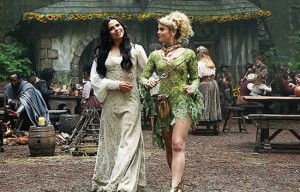 Along with the episodes, the release also contains a few bonus materials, such as the featurette “Inside the Writer’s Room,” giving you a peek at the process the writers use to crete the twisted storylines. Also included are a few deleted scenes, as well as bloopers and audio commentaries on selected episodes. “Wicked Villains” and “The Tale of Ariel” are two additional featurettes included on this release, exploring the respective aspects and characters of the show in more detail.

There is never a dull moment in Storybrook. Just when you thought things were over and the players could settle into their lives, yet another curse shows up, and yet another bad guy. I am really looking forward to what the next season will bring. For the time being, make sure you check out this Blu-Ray set, as it gives you the chance to revisit Storybrook, Neverland and the Enchanted Forest over and over again in eye-popping visual glory.