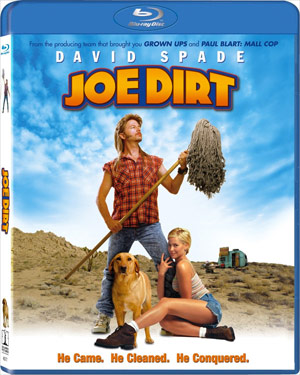 Occasionally, one wonders why certain films are picked while others are rotting a studios’ archives, and this is clearly such a case, as Sony Pictures Home Entertainment has decided to bring Joe Dirt to Blu-Ray Disc in July.

After being abandoned by his parents at the Grand Canyon, Joe Dirt (David Spade) tells the story of his journey to find his parents. The film also stars Dennis Miller, Brittany Daniel, Christopher Walken, Adam Beach, Jaime Pressly and Kid Rock.

The Blu-Ray version of “Joe Dirt” features all-new bonus material, including Interviews with David Spade and the cast, reminiscing about the making of the original film, along with an exclusive Behind-the-scenes Look at the forthcoming “Joe Dirt 2: Beautiful Loser.”

The release will also feature all legacy bonus materials, including Commentaries from David Spade and the director, Outtakes and Bloopers, Deleted and Alternate Scenes, as well as the original Theatrical Trailers.