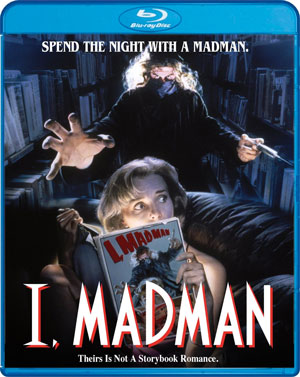 Shout! Factory has yet secured another gem for you, as the studio is preparing to release the 1989 horror flick I, Madman on Blu-Ray Disc in July as part of their Scream Factory line-up.

After a spine-tingling paperback catches the imagination of bookstore clerk Virginia (Jenny Wright), she seeks out the author’s second book, “I, Madman.” But once she opens the cover, its eerie tale of obsessive love comes to life, catapulting a disfigured, scalpel-wielding killer from the world of fiction onto the streets of Hollywood with one demented goal: to win Virginia’s love, one murder at a time!

Behind The Scenes Footage with Audio Commentary by Randall William Cook is also included, as well as the film’s
Theatrical Trailer and Home Video Trailer.

The disc is rounded out by a Still Gallery with