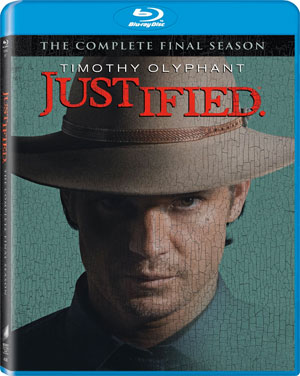 Sony Pictures Home Entertainment has just released information about the upcoming release of Justified: The Complete Final Season, bringing the police drama to Blu-Ray Disc and DVD in June.

From creator Graham Yost, each episode of the edge-of-your seat final season propels U.S. Marshal Raylan Givens (Timothy Olyphant) and criminal mastermind Boyd Crowder (Walton Goggins) ever closer to their ultimate confrontation. While Raylan is torn by just how far he will go to bring Boyd down – including using Boyd’s fiancée Ava (Joelle Carter) as his secret informant – both Raylan and Boyd must now contend with the new incendiary force in town (Sam Elliott), a drug lord intent on building his own pot empire in Harlan. Based on the acclaimed crime novels of Elmore Leonard, the Peabody Award-winning drama now takes its place in the pantheon of acclaimed drama series.

Available as a three-disc set, “Justified: The Complete Final Season” will include all 13 episodes, along with a number of bonus features.

The DVD version will contain the Featurette ”Hollywood to Harlan”, which allows you to join the writers of Justified in Kentucky as they conduct research before sitting down to write the final season of the show. From a visit to the Lexington marshal’s office to the coal mines of Harlan, the writers had an opportunity to experience Kentucky in a whole new way.

The Blu-Ray version includes the same featurette, but bolsters up the release with the additional Featurette ”Directing the Show:  Adam Arkin”, in which you can go behind the scenes with Director Adam Arkin as he directs the episode “Trust.” Also included on the Blu-Ray version is ”Dutch Speaks”, a vintage Interview with Writer Elmore Leonard about his thoughts on “Justified.” The release will be rounded out by a number of Deleted Scenes.

“Justified: The Complete Final Season” is headed your way on June 2 with a rather hefty $65.99 sticker price for the Blu-Ray version, and $55.99 for the DVD version.