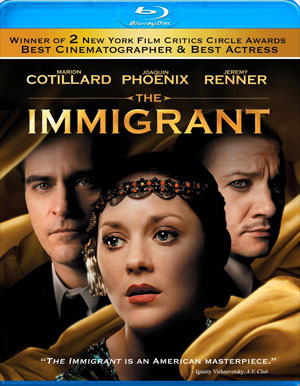 Anchor Bay Entertainment and The Weinstein Company have announced The Immigrant for release in April, making the film starring Marion Cotillard available on Blu-Ray Disc and DVD.

Ewa Cybulska (Academy Award® winner Marion Cotillard) and her sister sail to New York from their native Poland in search of a new start and the American dream. When they reach Ellis Island, doctors discover that Magda (Angela Sarafyan) is ill, and the two women are separated. Ewa is released onto the mean streets of Manhattan and quickly falls prey to Bruno (Joaquin Phoenix), a charming but wicked man who takes her in and forces her into prostitution. The arrival of Orlando (Jeremy Renner) – a dashing stage magician who is also Bruno’s cousin – restores her self-belief and hopes for a brighter future, becoming her only chance to escape the nightmare in which she finds herself.
The release will also include a Commentary Track with Writer/Director James Gray, as well as the Featurette ”The Visual Inspiration of The Immigrant”.