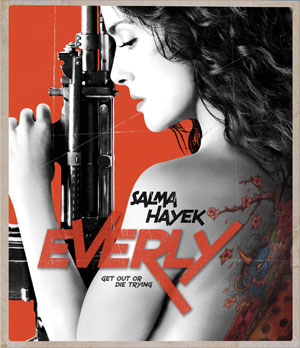 Anchor Bay Entertainment and RADiUS have just announced to give audiences the opportunity to bring home Joe Lynch’s high-octane thriller, Everly on Blu-Ray Disc and DVD in April.

Trapped in her apartment, Everly (Salma Hayek) is forced to fend off waves of assassins sent by her former lover – a dangerous Yakuza mob boss who wants her dead after he learns she is no longer loyal to him. Desperate to be re-united with her mother and young daughter, Everly must fight to kill her attackers before they destroy her and her family.

In addition, the release will be host to the ”Silent Night” Music Video by Raya Yarbrough & Bear McCreary.