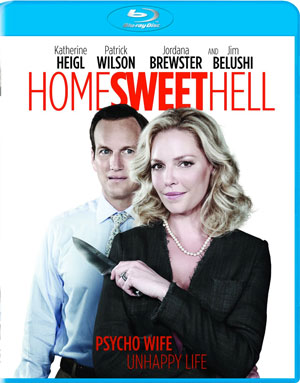 Sony Pictures Home Entertainment has just released detailed information about the upcoming release of the dark comedy Home Sweet Hell, scheduling it for Blu-Ray Disc and DVD in April.

Don Champagne (Patrick Wilson) seems to have it all: a successful business, a perfect house, perfect kids and a perfect wife. Unfortunately, when his wife, Mona (Katherine Heigl), learns of Don’s affair with a pretty new salesgirl (Jordana Brewster), this suburban slice of heaven spirals out of control. Don soon realizes that Mona will stop at nothing, including murder, to maintain their storybook life where “perception is everything.”

On the DVD version you will also find Two Deleted Scenes and the Making-of Featurette ”Suburban Butchery”.

The Blu-Ray version will further expand upon those bonus features by throwing an additional Seven Deleted Scenes into the mix, as well as Outtakes and the complete Champagne Furniture Store Commercial.