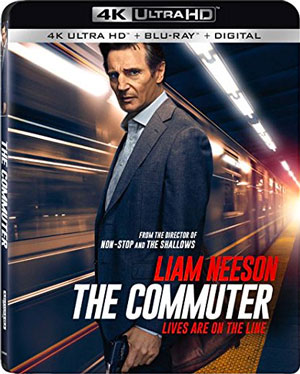 Lionsgate Home Entertainment has added The Commuter to its roster, making sure, this action thriller will make it to your living rooms on time in April.

Michael’s (Liam Neeson) daily commute home quickly becomes anything but routine. After being contacted by a mysterious stranger (Vera Farmiga), Michael is forced to uncover the identity of a hidden passenger on his train before the last stop. As he works against the clock to solve the puzzle, he realizes a deadly plan is unfolding and is unwittingly caught up in a criminal conspiracy. One that carries life and death stakes, for himself and his fellow passengers.

Aside from a high-end presentation of the feature film itself, with a Dolby Atmos audio track on 4K UHD and Blu-Ray, the release will also include the Featurettes ”End of the Line” and “Off the Rails”.
Mark April 17 in your calendars because that’s when The Commuter will be available in stores for $42.99 as a 4K UHD version, $39.99 as a Blu-Ray Disc Combo, and $29.95 on DVD.