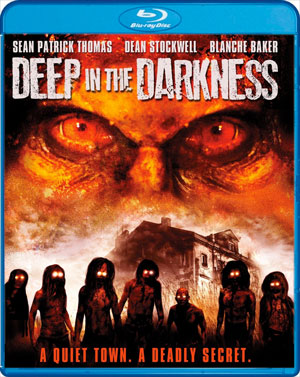 Shout! Factory has added the harrowing suspense thriller, infused with deadly small-town secrets and folklore, Deep in the Darkness, for release on Blu-Ray Disc in April.

Dr. Michael Cayle thought leaving the chaotic lifestyle of New York City for the quiet, small town of Ashborough would bring his family closer together. Soon after arriving, however, he discovers the town’s deepest secret: a terrifying and controlling race of creatures that live in the darkness in the woods behind his home.

The release will feature a 1080p high definition transfer and will be accompanied by a DTS 2.0 HD Master Audio track. As bonus features you will find the Featurette ”Meet the Makers” on the disc, along with the movie’s Theatrical Trailer and a selection of TV Spots.