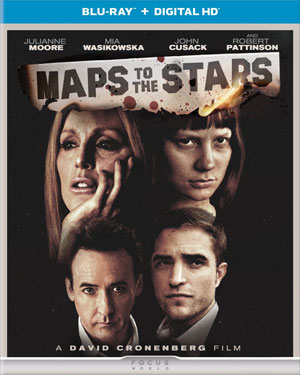 Universal Home Entertainment has recently added David Cronenberg’s latest thriller, Map to the Stars, to its roster, bringing the film to Blu-Ray Disc and DVD in April.

Julianne Moore stars with Mia Wasikowska, John Cusack and Robert Pattinson in this unforgettable, darkly comic thriller from acclaimed director David Cronenberg. Hollywood actress Havana Segrand (Moore) is unraveling as her career flounders. Her therapist (Cusack) and his wife are busy managing the career of their child-star son. But when a mysterious young woman named Agatha (Wasikowska) befriends a limo driver (Pattinson) and ties all their lives together, nothing will ever be the same as they try to survive a world of money, fame, envy and relentless hauntings.

Surprisingly, it appears as if the release will be a bare-bones affair. No bonus features have been announced for either version of this film, though the Blu-Ray Disc will offer a DigtialHD copy of the movie.