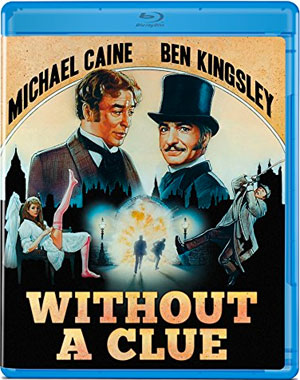 Olive Films has just unveiled the upcoming release of the 1988 comedy Without a Clue on Blu-Ray Disc and DVD in March.

Suppose for a moment that Dr. Watson was the real brains behind Sherlock Holmes? The result is anything but elementary as Academy Award winners Michael Caine and Ben Kingsley deliver their hilarious performances in this twisted madcap mystery.

Dr. John Watson (Ben Kingsley) is secretly a crime-solving genius. But to protect his reputation as a physician, he hires bumbling, boozy, out-of-work actor Reginald Kincaid (Michael Caine) to play the part of his fictional creation, Sherlock Holmes. The charade works until Watson mysteriously disappears, forced the baffled, seriously inept “Holmes” to crack the biggest case of Watson’s career on his own!

As a bonus feature the release will contain the movie’s Theatrical Trailers.