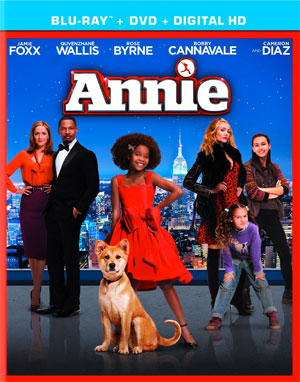 Sony Pictures Home Entertainment has added the new remake of Annie to its line-up, scheduling the family comedy for release on Blu-Ray Disc and DVD in March.

Annie is a spunky upbeat foster kid who’s also tough enough to make her way on the streets of New York. Everything’s about to change when a hard-nosed tycoon takes her in and believes he’s her guardian angel, but Annie’s sun-will-come-out-tomorrow outlook on life just might mean it’s the other way around.

The DVD version will contain a Director’s Commentary, as well as a Making-Of Featurette and the Music Video ”You’re Never Fully Dressed Without a Smile”.

The Blu-Ray version will contain the same bonus materials, but will further add Bloopers to the mix, as well as the Deleted Song ”Something Was Missing” with Jamie Foxx.

Four All-New Featurettes “It’s a Hard Knock Camp,” “Fun with Sandy the Dog,” “A Day on Set With Quvenzhané,” and “Moonquake Lake – On Set!” are also part of the release, along with Sing-Alongs for “Hard Knock Life,” “I Don’t Need Anything But You,” “I Think I’m Gonna Like It Here,” “Opportunity,” and, of course, “Tomorrow”.

Tomorrow Around the World is also included, as is a Photo Gallery and a Trivia Track.