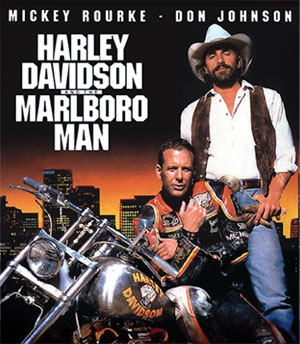 Shout! Factory is in the process of putting together a Blu-Ray version of the 1991 cult film Harley Davidson And The Marlboro Man for release in May.

Mickey Rourke and Don Johnson star in this four-lane genre collision of biker movie, heist thriller, buddy flick and sci-fi pic that will take you to the hardline of action and adventure! Co-starring Tom Sizemore, Chelsea Field, Tia Carrere and Vanessa Williams, this relentlessly explosive actioner just may prove that “it’s better to be dead and cool than alive and uncool.”

When their favorite bar is threatened with closure, outlaw biker Harley (Rourke) and modern-day cowboy Marlboro (Johnson) hatch a scheme to save the day – by robbing the corrupt bank behind the bar’s shutdown! When the robbery yields not money but a shipment of drugs, Harley and Marlboro find themselves on the run from the bank’s sinister president (Sizemore) and a posse of seemingly unstoppable hit men. Now wanted dead or alive, the hard-riding heroes must fight for their very lives… and learn that when the going gets tough, the tough take the law into their own hands.

Aside form the film, the studio will also add a Vintage Featurette to the disc, as well as the movie’s Theatrical Trailer.