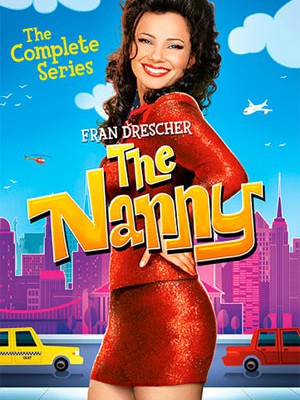 Shout! Factory is currently preparing a dazzling DVD set of The Nanny, the television show starring Fran Drescher and Charles Shaugnessy, that will be ready to be unleashed in May.

That flashy girl from Flushing with the heart of an angel (and the voice of a slighty more nasal angel) is here at last in The Nanny: The Complete Series. Starring the one and only Fran Drescher in her signature role, “The Nanny” charmed television audiences throughout its six-season network run.

Detailing the comic misadventures of the sweet and sassy Fran Fine (Fran Drescher), her sophisticated employer, Broadway producer Mr. Sheffield (Charles Shaugnessy), his boisterous brood (Nicholle Tom, Benjamin Salisbury and Madeline Zima) and his wisecracking staff (Lauren Lane and Daniel Davis), each hilarious episode of “The Nanny” will now be available,  many on DVD for the first time.

Featuring all 146 episodes on 19 discs, the set will also contain a number of bonus materials, including a new never-before-seen interview in which Fran Drescher and her co-creator on “The Nanny,” Peter Marc Jacobson, dish out the real behind-the-scenes story of the show, and their partnership in life and business.

You will also find Commentary Tracks by Fran Drescher on select episodes, including the show’s pilot. To complete the set, the release will also contain a Making-Of Featurette.

“The Nanny: The Complete Series” arrives on May 26 for $149.99. If you don’t want to wait that long, however, you can pre-order the set directly from Shout! Factory and get it 4 weeks before its official release!