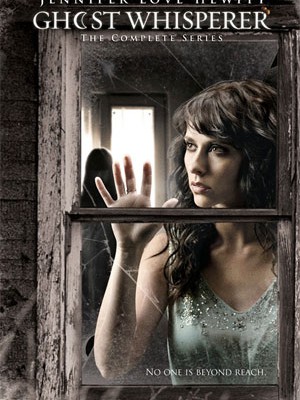 With a running length of over 78 hours, Paramount Home Entertainment has just added The Ghost Whisperer: The Complete Series to its line-up, bringing you all 5 seasons of the show in a single DVD set in March.

Melinda Gordon (Jennifer Love Hewitt) communicates with earthbound spirits, ghosts who cling to the living because they have unfinished business that prevents them from moving beyond the familiar plane of existence that we call life. Inspired in part by the work of famed medium James Van Praagh and of Mary Ann Winkowski, a real-life communicator with spirits, “Ghost Whisperer” explores the spiritual side of life and death as Melinda navigates among the dead and the living in her sometimes chilling, sometimes heart-rending and sometimes amusing attempts to act as an intermediary between the ghosts and those they haunt. Jim, her husband, worries about the emotional toll this work is taking on his wife as they embark on a new life together. Melinda recently has revealed her gift to her new friend, Delia Banks, a single mom who works in Melinda’s antique shop. However, Melinda fears the consequences of drawing Delia into this unconventional world. Melinda also shared her secret with quirky Professor Rick Payne, an expert in occult beliefs and history who thrives on helping her gain insights into the more baffling paranormal phenomena she encounters. For her part, Melinda accepts her unique abilities as a blessing and sometime curse, but always helps her clients, alive or dead, find emotional closure.

Aside from every single episode of the show, the DVD set will also be packed with bonus features, including Commentary Tracks on selected episodes, Deleted Scenes, Bloopers and the Web Series.

The core of the bonus features will be a host of Featurettes, such as ”The Jamie Kennedy Experiment,” “Can You See Me? The First Season of Ghost Whisperer,” “Animated Short,” “Celebrating 100,” “A Season of Changes,” “Season 4: Love Never Dies,” “Scoring The Spirit World,” “Melinda’s Closet,” “A Conversation With The Living,” “Ghostly Visions,” “Bringing The Spirits To Life,” “A Triple Threat,” “Welcome To The Underworld,” “Ghost Town,” “Grandview Graveyard,” ”Payne’s World,” “Ghosts of Rockland Memorial,” “Grave Mistakes,” “The Other Side Behind-The-Scenes with star Mark Hapka,” “Evolution of Melinda,” and “Melinda’s Haunted Diary”.

A number of Interactive Features and a Jennifer Love Hewitt Speed Painting Video will also be included.

“The Ghost Whisperer: The Complete Series” will materialize in stores on March 17 for $79.99.