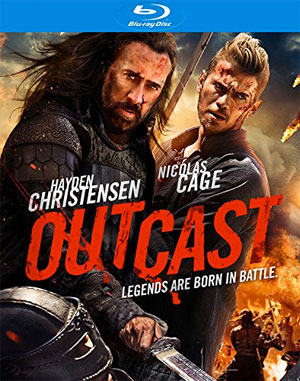 Entertainment One has added the epic medieval crusade Outcast starring Nicolas Cage and Hayden Christensen to its line-up, scheduling a Blu-Ray Disc and DVD for release in March.

When the heir of the Imperial throne becomes the target of an assassination by his despised older brother, the young prince (Hayden Christensen) must flee the kingdom and seek protection. His only hope for survival is a reluctant war-weary crusader named Jacob (Nicolas Cage), who must overcome his own personal demons and rally the assistance of a mythical outlaw known as The White Ghost. Together they must fight side by side in an epic battle to return the prince to his rightful place on the throne.

Although no bonus materials have been specified at this point, the studio has made available various behind the scenes clips and making-of featurettes online, which would lead us to believe that these materials will be included in the release.

You can see Nicolas Cage as a sword-wielding Templar Knight in “Outcast” on March 31 for $29.99 on Blu-Ray Disc and DVD.