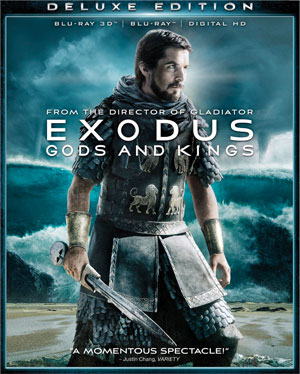 From acclaimed director Ridley Scott (Gladiator, Prometheus) comes “Exodus: Gods and Kings,” the epic tale of one man’s daring courage to take on an empire. Using state-of-the-art visual effects, this spectacular adventure brings new life to the story of Moses (Christian Bale) as he defies the Pharaoh Ramses (Joel Edgerton), setting 400,000 slaves on a monumental journey of escape from Egypt.

Twentieth Century Fox Home Entertainment will release a single-disc DVD version, as well as a BluRay version and a Blu-Ray 3D/Blu-Ray/DVD Combo pack.

Among the supplements on the release you will find a Commentary TRack by director Ridley Scott, as well as Nine Deleted Scenes and the 14-part Documentary ”Keepers of the Covenant” that is chock-full with interviews, production information and behind-the-scenes footage. The release is rounded out by the Featurette ”The Lawgiver’s Legacy: Moses Throughout History.”