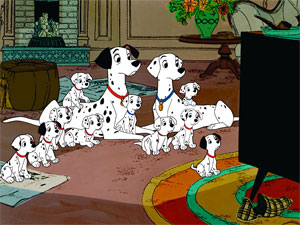 I recently re-watched the 2-disc Platinum DVD edition of Walt Disney’s “101 Dalmatians, ” and noticing its shortcomings in today’s high definition regaled world, I was eager to take a look at the Blu-Ray version the studio just released.

I am happy to report that it looks wonderful with a clarity in the penciling and coloring that has been previously lost, but in addition, I am always surprised at how the film speaks to me even as an adult. One of the truly extraordinary qualities in Disney’s films was the level of sophistication he brought to them, from the animation to the stories to the characters onscreen. He produced genuine family films as opposed to children’s films, meaning that his movies had the capability to unite audiences of all ages with material that was gentle enough for the youngest children but exciting and gripping for their parents and even their grandparents. This is especially true for “101 Dalmatians,” which marked a departure from the fairy tale landscapes of Disney’s previous animated works, instead taking on a contemporary urban setting and an overall less romantic approach.

Set in 1960s London, the relatively simple story begins with Pongo (voiced by then little-known Rod Taylor), a bachelor Dalmatian who decides it is time that he found himself and his “pet” human Roger (Ben Wright) a couple of mates. He catches sight of Perdita (Cate Bauer), a lovely female Dalmatian, and her “pet” Anita (Lisa Davis) walking to the park and hatches a quick plan to get the four of them together. It is love at first sight all around, and Roger and Anita marry soon after. With the eventual discovery that Perdita is expecting puppies comes the arrival of Anita’s old schoolmate, the outrageously fiendish Cruella De Vil (Betty Lou Gerson). She offers to buy the spotted pups when they are born to take them off the struggling couple’s hands, but Anita and Roger cannot bear to let them go. Barely concealing her true intention of using the dogs to create a Dalmatian fur coat, Cruella hires two bumbling thieves to steal the puppies for her. 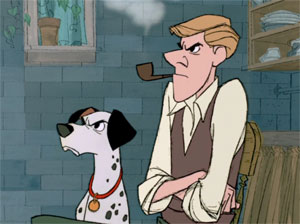 With their brood gone, Pongo and Perdita must rely on the help of animals across London, canine or otherwise, to spread word of the disappearance and be on the lookout for the missing puppies. What follows for the rest of the film is a remarkably touching portrayal of solidarity as dogs of various breeds, a cat, a horse, and even farm cows unite in finding and returning the Dalmatian puppies to safety.

The unlikely camaraderie formed between these animals is brought about by a common enemy—man. Disney explored this theme nearly 20 years earlier in “Bambi,” but this time the human characters are presented on both sides of the moral compass. Cruella is the very embodiment of selfish human desires, finding value in nature only as an accessory to her self-indulgent lifestyle. On the other hand, Roger and Anita, as well as their sweetly flustered maid, are loving individuals who treat their pets as members of the family. In one of the film’s most endearing moments, Roger, whose nervous anticipation of the puppies’ births exceeds even Pongo’s, resuscitates a stillborn pup by gently massaging it in the palm of his hand. 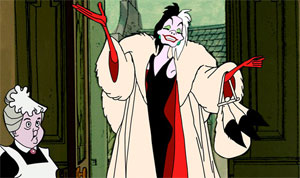 What has truly kept “101 Dalmatians” alive in the memories of most children throughout the years, however, is Cruella De Vil herself, one of the most deliciously nasty characters in Disney’s oeuvre. With her skeletal figure, smothering fur coat, sickly purple skin, and literally half-black/half-white hair, she is one of the most instantly recognizable characters in all of animated film. And with a vocal performance by Betty Lou Gerson that is for the ages, she has the personality to match. Her distinctly upper-crust cadence and haughty cackle smack of social elitism, yet she is physically repulsive. Constantly surrounded by a cloud of yellowish green smoke from her characteristic pink cigarettes, she seems to spew corruption with every move. Like the Wicked Witch of the West, Cruella De Vil is alternately comical and frightening and always mesmerizing when she is onscreen. A fleeting close-up shot of her crazed face as she furiously pursues the escaping puppies near the end of the film was one of the most startling cinematic images of my childhood, and it has not lost its effect on me.

Also worth noting about the film is its visual appearance. This was the first animated feature film to be made extensively using Xerography, a process that allowed the animators’ drawings to be copied directly onto film cels rather than going through the traditional inking stage, during which artists would trace (and sometimes reinterpret) the original drawings. Due to certain limitations with the new technology, the animators were forced to adopt a different drawing style that was straighter and more angular than that of previous films. They turned to a much more stylized mode of drawing, with sometimes monochromatic and abstract backgrounds. The overall look is something akin to Modern art, and while Walt Disney was reportedly not happy with the stylistic departure, it suits the contemporary, “real world” setting. Composer George Bruns fashioned a jazzy score that nicely complements the Modern animation, and “101 Dalmatians” stands as a major turning point in Disney animation, both technically and artistically, that would prevail throughout most of the 1960s and 1970s with titles like “The Sword in the Stone” and “The Jungle Book.” 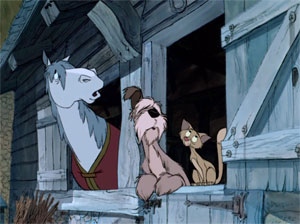 The high definition debut of “101 Dalmatians” will undoubtedly make even the most finicky fans happy, as the transfer is marvelously clean and offers unprecedented amount of detail and inherent sharpness. The pencil strokes-not inked black many times as part of the visual style of the movie—are perfectly reproduced even in their most subtle shades of gray, while the ink lines are always bold and razor sharp, and oftentimes much finer that you may have thought—brought to life as such as a result of the high definition of the transfer.

Colors are beautiful and rich, without ever giving away the film’s real age. Whether it is the subtle water color tones or the more vibrant coloring of the foregrounds and characters, this transfer makes sure you are truly witnessing this film the way Walt Disney and the animators had intended it to look. It is mesmerizing to say the least.

The release comes with a DTS 7.1 HD Master Audio track. Although the production has aged and the track still does have a certain narrowness in its frequency response, the mix is generally active and very pleasing. Dialogues are clean and always understandable and with a natural bass extension, the film sounds as well as it can, I suppose. Aside from various language tracks, the original English theatrical mono track is also included.

The supplements found on the disc are a mix of old and new. The new animated short film “The Further Adventures of Thunderbolt” is a brand new feature. It is accompanied by “Dalmatians 100,” hosted by the Disney Channel’s Cameron Boyce.

The original segment “The Best Doggoned Dog in the World” from 1961 is also included on the release, along with a conversation with the Disney Team, called “Lucky Dog.” 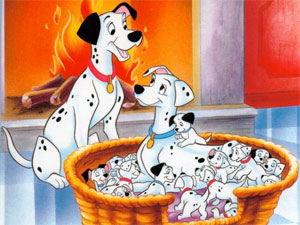 In the “Classic Features” section on the disc you will find the bulk of the special features culled from the previous DVD releases. First up is the seven-part, 34-minute “Redefining The Line: The Making of One Hundred and One Dalmatians.” This takes us behind the scenes with interviews with the film’s animators, Disney historians, voice actress Lisa Davis (Anita), and current Disney artists. The film is examined from its conception through production to its release with storyboards, animation tests, and production photos. I personally found the segments on the animation, particularly the innovation of Xerography, to be the most intriguing. The seven parts can be viewed individually or in succession with a “Play All” option.

Next is “Cruella De Vil: Drawn to Be Bad,” a seven-minute featurette on the diva villain. Her appearance, voice, and place in animation history are explored through interviews with many of the same people from the previous feature. Early concept art is also shown.

“Sincerely Yours, Walt Disney” is a curious feature that presents dramatic readings and recreations of letters and correspondences between Walt Disney and author Dodie Smith in relation to the film. This 13-minute piece chronicles the author’s excitement and anticipation over the film adaptation and highlights some of the discrepancies between book and movie.
This section of bonus features ends with a collection of trailers and radio and TV spots from the movie’s various theatrical releases and several art galleries showcasing storyboards, concept character art, background designs, and production stills. 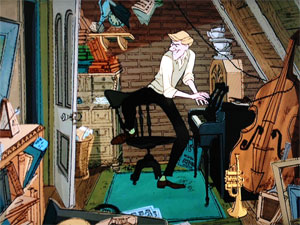 Another interesting section on the disc is called “Music & More.” An extensive collection of abandoned, deleted, and alternate versions of songs await you here, either newly recorded or, in most cases, in their original recordings. These include an alternate song about Cruella De Vil, a scrapped song from the puppies’ escape scene played over storyboards of the deleted footage, and tests for the humorous “Kanine Krunchies” jingle. The Selena Gomez music video of her new rendition of the song “Cruella De Vil” from the movie is also included here, offering a pop twist to the track that should appeal to children.

A selection of promo and radio spots, as well as trailers round out the release.

It is wonderful to see that “101 Dalmatians” is still enchanting 60+ years after its initial release, and it is made still better in this brand new high definition Blu-Ray release. The cuddly canines and unforgettable villain make this sublime entertainment for children, but their parents will also appreciate the captivating story, its positive message, and the sophisticated visuals. Although it ventured away from the romanticized fairy-tale worlds of “Snow White and the Seven Dwarfs” and “Cinderella,” it proved that the Disney magic transcends time and locations and that even contemporary London can hold that special charm. This is a classic Disney film that should not be missed by any child, young or old.