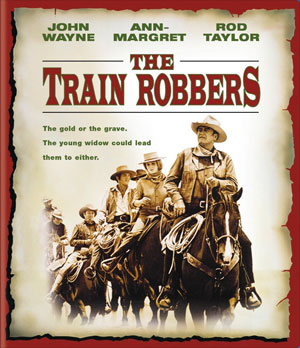 Warner Brothers Home Entertainment has added the John Wayne Western The Train Robbers to its release line-up, scheduling the 1972 film for a first-time Blu-Ray release in June.

Three Civil War veterans team up with a train robber’s widow to recover a cool half-million in hidden gold. The widow (Ann-Margret), the kind who “sticks out in all the right places,” wants to clear her husband’s name. The three friends (John Wayne, Rod Taylor, Ben Johnson) want the $50,000 reward. But the dead man’s ex-partners just want the gold – and will kill to get it.

The release will include the same bonus materials found on the 2007 DVD release of the movie, namely the Featurette ”Working with a Western Legend”, the Vintage Featurette ”The Wayne Train” and a John Wayne Trailer Gallery.

“The Train Robbers” will arrive in stores around the country on June 2 for only $14.98 on Blu-Ray Disc.