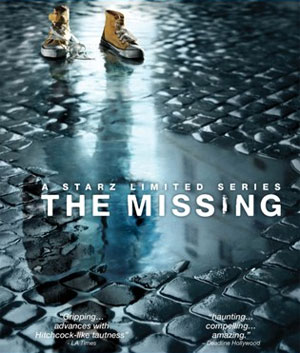 Anchor Bay Entertainment has added The Missing to its release roster, scheduling the Golden Globe® nominated STARZ Limited Series for release on Blu-Ray Disc and DVD in April.

“The Missing” follows Tony, played by James Nesbitt (The Hobbit trilogy, “Jekyll”), as a man devastated by the abduction of his young son, Oliver, during a family vacation in France.  He becomes obsessed and spends years searching, unable to accept the potential fate of his child. Tony’s exhaustive quest fractures his marriage to Emily, played by Frances O’ Connor (“Mr Selfridge,” A.I. Artificial Intelligence) who earned a Golden Globe® nomination for her emotionally-gripping role here. Tchéky Karyo (GoldenEye, The Patriot) plays Julien, the French police detective who launched the initial search for the child.  Even though Julien is retired in present day, he too cannot shake the small belief that the child may still be alive.  Told using a fascinating narrative puzzle, “The Missing” explores the impact of a child’s abduction and the emotional cost of obsession…and hope. This gripping thriller is told simultaneously over two time frames, while set in both France and London.

Aside from all 8 episodes making up show with a running length of 472 minutes, the release will also include the Featurettes ”Time Changes All,” “Transformations,” and ”Behind The Scenes”.