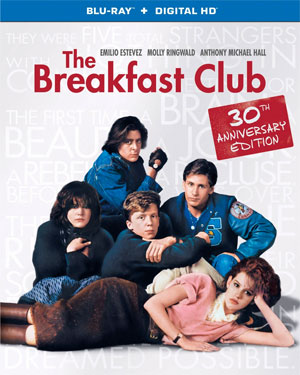 Universal Home Entertainment is also in a celebratory mood, putting on our radar a 30th Anniversary Edition of John Hughes’ The Breakfast Club. Offering up the film on Blu-Ray Disc and DVD, the release has been scheduled for March.

From writer/director John Hughes (Sixteen Candles, Weird Science), “The Breakfast Club” is an iconic portrait of 1980s American high school life. When Saturday detention started, they were simply the Jock, the Princess, the Brain, the Criminal and the Basket Case, but by that afternoon they had become closer than any of them could have imagined. Featuring an all-star ’80s cast including Emilio Estevez, Anthony Michael Hall, Judd Nelson, Molly Ringwald, and Ally Sheedy, this warm-hearted coming-of-age comedy helped define an entire generation!

The release will feature a high definition transfer with a DTS 5.1 HD Master audio track in English and DTS Stereo tracks in a variety of other languages.

In addition, the release will contain a Digital Copy of the movie, a Feature Commentary with Anthony Michael Hall and Judd Nelson, as well as a Trivia Track called ”Accepting the Facts: The Breakfast Club”.

Further you will find the Featurettes ”Sincerely Yours,” and “The Most Convenient Definitions” on the disc, examining the origins of the film’s Brat Pack.

“The Breakfast Club: 30th Anniversary Edition” is scheduled to land in stores on March 10 for $19.98 on Blu-Ray Disc.