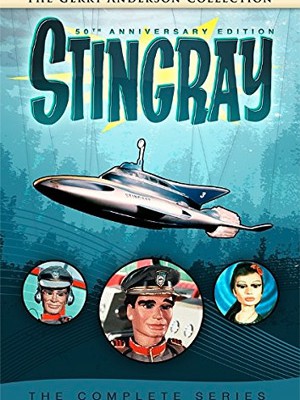 Created by the television pioneers Gerry and Sylvia Anderson, who also brought you highly beloved series, such as “Thunderbirds!,” “Space: 1999” and others, it allows you to join the World Aquanaut Security Patrol in a riptide of retro TV in this colorful sci-fi adventure series.

The flagship of the World Aquanaut Security Patrol (W.A.S.P.), Stingray is the world’s most highly sophisticated submarine, capable of speeds of over 600 knots and the ability to submerge anywhere on the Earth’s ocean floor. Under the command of the square-jawed and heroic Captain Troy Tempest, Stingray explores the most treacherous depths of our waters and protects the world from the perils that lurk undersea.

“Stingray: The Complete Series” contains all 39 episodes of the Supermarionation classic on five DVDs. The set will also include a number of bonus features, such as a previously unseen Interview with Gerry Anderson, an Audio Commentary by the creators, a Making-of Featurette and a whole lot more!