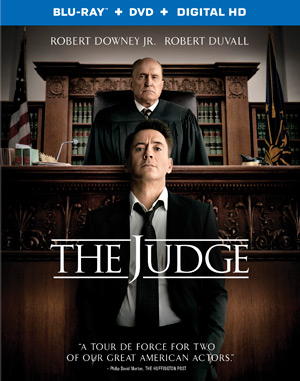 Warner Brothers Home Entertainment has just unveiled details about the upcoming release of The Judge, starring Robert Downey Jr., Robert Duvall, Vera Farmiga, and Billy Bob Thornton, bringing the film to Blu-Ray Disc and DVD in January for you to experience the film at home.

In “The Judge,” Robert Downey Jr. stars as big city lawyer Hank Palmer, who returns to his childhood home where his estranged father, the town’s judge (Robert Duvall), is suspected of murder. He sets out to discover the truth and along the way reconnects with the family he walked away from years before.

The DVD version will include the feature film along with the Featurette ”Getting Deep With Dax Shepard”.

The Blu-Ray version comes with a 1080p high definition presentation and will also contain a Commentary Track by director David Dobkin, as well as Deleted Scenes With Optional Commentary by David Dobkin.

Further, you will find the Featurettes ”Inside The Judge” and ”Getting Deep With Dax Shepard” on the release.