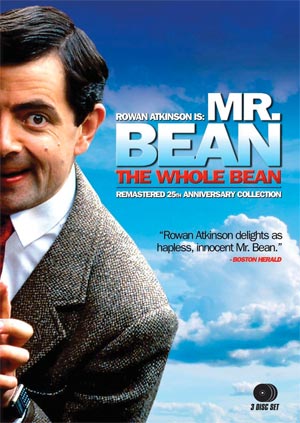 Shout! Factory has just added a hilarious release to its roster, by scheduling Mr. Bean: The Whole Bean for release as a DVD set in March to celebrate the show’s 25th anniversary.

Arriving on four DVDs, the set contains all 14 episodes of the show in which Mr. Bean (Rowan Atkinson) captured the hearts of million viewers worldwide and has been called the most embarrassing man on earth. He is the character who was born yesterday, someone who everyone wants to help out of his sticky situations, but nobody would invite for tea. Behold the man who is a bean, Mr. Bean! Aided by his best friend Teddy, Mr. Bean stumbles from one mishap to the next, always finding complex solutions to the simplest of problems. He creates his own messes and delights audiences with his uproarious facial expressions and physical comedy.

It also comes with 72-minutes worth of The Best Bits of Mr. Bean and the 40-minute Documentary “The Story of Mr. Bean”.

The Never Before Seen-On-TV Sketches ”Bus Stop” and ”Library” are also included on the set, along with the Mr. Bean: The Animated Series Trailer.