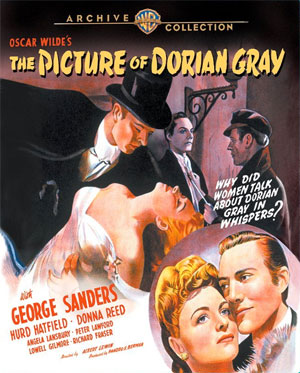 Warner Brothers Home Entertainment has just made the 1945 movie The Picture of Dorian Gray available on Blu-Ray Disc as part of the Warner Archive Collection.

George Sanders commands the screen as the acerbic, cynical Lord Henry Wotton whose errant musings unwittingly plunge a soul into a leprotic existence of amoral degradation. Hurd Harfield plays the eponymous Gray whose unchanging, placid beauty is enabled by his cursed portrait that embodies his age and decay. Albert Lewin writes and directs from the classic by Oscar Wilde, with Angela Lansbury and Donna Reed as the ladies that bookend Dorian’s damnation.

The release brings the film to high definition for the very first time and offers a pristine 1080p transfer that shows off the films B&W chiaroscuro as well as it’s shocking, stunning Technicolor portrait inserts in finer-than-fine form, as befits this truly elegant tale of terror.

“The Picture of Dorian Gray” is now available through the Warner Archive Collection or at selected retailers for only $18.95.