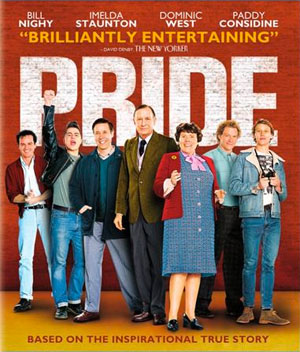 Sony Pictures Home Entertainment has added Pride to its roster, critically acclaimed comedy which follows a London-based group of gay and lesbian activists who come together to help families affected by the UK miners’ strike in 1984. The film starring Bill Nighy and Imelda Staunton will arrive on Blu-Ray Disc and DVD in December.

“Pride” is inspired by an extraordinary true story. It’s the summer of 1984 and much of blue-collar Great Britain is on strike.  For one tiny Welsh village, the strike brings unexpected visitors—a group of London-based activists who decide to raise money to support the strikers’ families and want to make their donation in person. In this feel–good, heartwarming comedy, two groups, seemingly from worlds apart, discover that standing together makes for the strongest union of all.

The release will also feature Six Deleted and Extended Scenes, as well as the Featurette ”Pride: The True Story.”