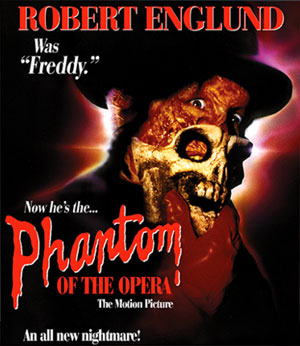 Shout! Factory is working on a few exciting horror tiles for its Scream Factory label, preparing films such as Candyman: Farewell to the Flesh and the Robert Englund vehicle The Phantom of the Opera for release on Blu-Ray Disc in January.

The myth of the Candyman has endured for generations. His legacy is eternal rage. And now he’s back…with a vengeance! “Candyman: Farewell to the Flesh” continues the tale of the phantom-like figure who wreaks a terrible fate upon those who chant his name five times while looking into a mirror… and come face to face with grisly death.

A victim of unspeakable evil while he lived, the “Candyman” (Tony Todd) has become evil incarnate in his afterlife. This time, he haunts the city of New Orleans, where a young schoolteacher named Annie Tarrant (Kelly Rowan) is struggling to solve the brutal murder of her father. The locals insist that he was slain by the Candyman, but Annie is not convinced… until she unwittingly summons the monster forth, learns the secret of his power, and discovers the link that connects her to him. But can she stop him before he kills again?

In The Phantom of the Opera, Robert Englund assumes the classic role of The Phantom in this shocking, nerve-jangling retelling of Gaston Leroux’s timeless tale of music, madness and murder!

An aspiring opera singer finds herself transported back to Victorian-era London – and into the arms of a reclusive, disfigured maestro determined to make her a star. The silver-throated Christine (Jill Schoelen) enjoys success through the arrangements of her new lover (Robert Englund)… until she realizes that he has been committing unspeakably grisly murders in her honor and won’t stop until he’s completed his masterpiece… in blood!

The movies have been scheduled for release on January 6 and January 3, respectively. No exact details about the supplements that will go on these releases have been announced yet but we will keep you up to date as more information becomes available.