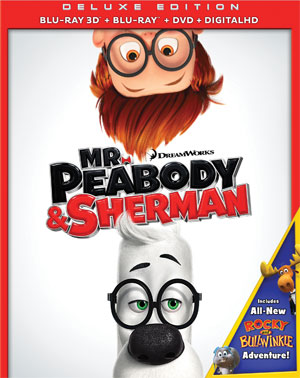 Mr. Peabody (Ty Burrell) is an inventor, scientist and genius who just happens to be a dog. With his son Sherman (Max Charles), he will embark on the most extraordinary adventure imaginable as they race against time to repair history and save the future.

The featurette History’s Greatest Mysteries – A Dog and his Boy will also be included, along with Peabody’s Paw Print on History, in which you can take part in the excitement as Mr. Peabody gets his pawprints in cement at the TCL Chinese Theatre. Cast members Ty Burrell (voice of “Mr. Peabody”) and Max Charles (voice of “Sherman”), join filmmakers Rob Minkoff (director), Alex Schwartz (producer) and Tiffany Ward (executive producer) for the festivities. Also on hand (or paw?) are some of Mr. Peabody’s very famous furry friends, including Lassie, Beethoven, Rin Tin Tin, and a very adorable dog named George Clooney.

The disc also offers up interactive games for the younger viewers, such as a Time Travel Memory Match and The WABAC Jigsaw Puzzle.

In addition to these features, the Blu-Ray 3D version will also include an All New Rocky & Bullwinkle Adventure.