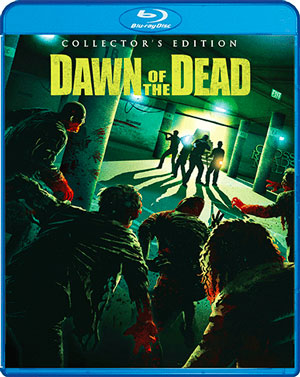 Shout! Factory has just added two must-have releases to their fall schedule, announcing the upcoming release of the George A. Romero-penned Dawn of the Dead remake by Zack Snyder and Romero’s own Land of the Dead on Halloween day under their Scream Factory label.

Both films will be presented as 2-disc Collector’s Editions with brand new cover art. They will feature brand new 2K transfers taken from the interpositive, and are chock-full of bonus features, and anyone familiar with Shout! Factory’s work, will know that this means, fans of these films are in for an absolute treat!

Heart-pounding action and bone-chilling thrills power the edgy and frightening remake of George A. Romero’s apocalyptic horror classic, Dawn Of The Dead! The world is in danger when a mysterious virus turns people into mindless, flesh-eating zombies. In a mall in the heartland, a handful of survivors wage a desperate, last-stand battle to stay alive… and human!

The release will contain the Theatrical Cut of the movie, as well as an Unrated Version. A series of Interview Featurettes will be included, featuring actor Ty Burrell, writer James Gunn, and actor Jake Weber.

Also included is Killing Time at the Mall: The Special Effects of Dawn of the Dead, offering up an interview with special makeup effects artists David Anderson and Heather Langenkamp Anderson

Deleted Scenes with optional commentary by director Zach Snyder and producer Eric Newman will also be included, as well as the movie’s Theatrical Trailer and a Still Gallery.

The unrated version will also feature a Commentary Track with director Zach Snyder and producer Eric Newman, as well as the Featurettes “Splitting Headaches: Anatomy of Exploding Heads,” “Attack of the Living Dead,” “Raising the Dead,” “Andy’s Lost Tape,” “Special Report: Zombie Invasion,” “Undead and Loving It: A Mockumentary,” and “Drawing the Dead.”

Also look for Storyboard Comparisons on the release. 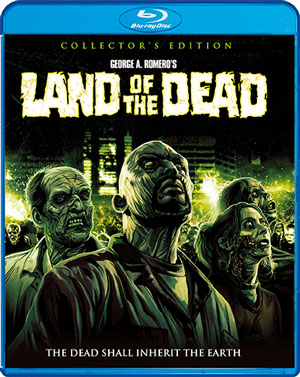 George A. Romero’s Land of the Dead is a harrowing vision of a post-apocalyptic world, in which zombies have turned all but a few fortified cities into desolate wasteland. Behind city walls, pockets of humanity cling to survival in a brutal society built by a handful of enterprising, ruthless opportunists like Kaufman (Dennis Hopper), who insulate themselves in high-rise towers and employ a band of mercenaries led by Riley (Simon Baker) to scavenge the countryside for food and other necessities, while the poor fend for themselves. When the previously mindless, slow-moving zombies begin to evolve into cunning, crafty killers and organize for a final catastrophic attack, a group of hardened mercenaries is called into action to protect the living from an army of the dead, even as they battle a rogue mercenary (John Leguizamo) who threatens the existence of their safe haven.

A number of Featurettes will be included also, such as ”Undead Again: The Making of Land of the Dead”, “Bringing The Dead To Life,” “Scenes of Carnage,” “Zombie Effects: From Green Screen to Finished Scene,” “Scream Test – CGI test,” “Bringing the Storyboards to Life,” “A Day with the Living Dead hosted by John Leguizamo,” and “When Shaun Met George.”.

The release is rounded out by Deleted Scenes and the movie’s Theatrical Trailer.

Dawn of the Dead and Land of the Dead will be in stores on October 31 for $34.98. If you pre-order the titles directly from Shout! Factory’s website, you will also receive a free poster and, perhaps most importantly, you will receive the disc two weeks before its official release, giving you plenty of time to enjoy it before Halloween!