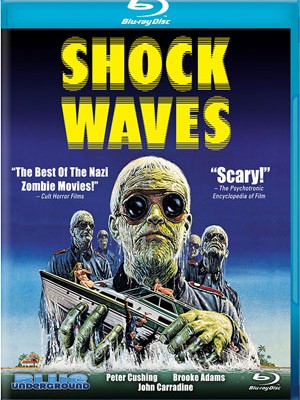 Beneath The Living… Beyond The Dead… From The Depths of Hell’s Ocean!

In the dark days of World War II, the Nazi High Command ordered its scientists to create a top secret race of indestructible zombie storm troopers – un-living, unfeeling, unstoppable monstrosities that killed with their bare hands. They were known as The Death Corps. No member of this horrific SS unit was ever captured by the Allied Forces – and, somewhere off the coast of Florida, they have survived…

Peter Cushing, Brooke Adams and John Carradine star in this suspenseful and genuinely creepy shocker co-written and directed by Ken Wiederhorn. One of the great horror “sleepers” of the 1970s, “Shock Waves” has been freshly transferred and fully restored in high definition from the only known surviving materials!

As bonus materials, the release will include a Commentary Track by Co-Writer/Director Ken Wiederhorn, Make-Up Designer Alan Ormsby and Filmmaker Fred Olen Ray.

In addition, the disc will come with the Theatrical Trailer, TV Spot and Radio Spots, as well as a Poster & Still Gallery.