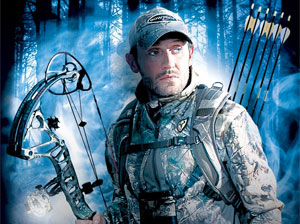 Entertainment One has revealed details about their upcoming release of The Hunted, scheduling the film for DVD in September.

“The Hunted” follows family-man, hunter, Jake, played by Josh Stewart, alongside his best friend Stevie (Ronnie Gene Blevins) as they journey deep into the Appalachians of West Virginia on the hunt for a legendary buck. Chasing their dream of landing a television hunting show, the duo head into the dense, secluded mountains armed with only their bows and camera equipment.  The friends quickly realize there is something else that stirs within the woods. Something that, turn by turn, begins to hunt them…

Featuring an anamorphic widescreen transfer and Dolby Digital 5.1 audio, the release will also include a Commentary Track by director Josh Stewart and the movie’s Producers. Also included on the disc is the Featurette “The True Story”.