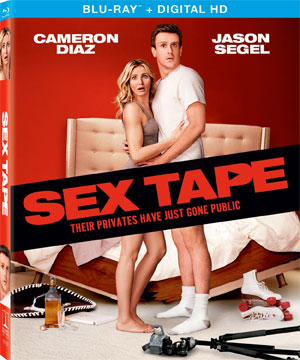 Sony Pictures Home Entertainment has unveiled details about the upcoming release of the comedy Sex Tape, scheduling it for Blu-Ray Disc and DVD in October.

Jay (Jason Segel) and Annie (Cameron Diaz) are a married couple still very much in love, but ten years and two kids have cooled the passion. To get it back, they decide – why not? – to make a video of themselves trying out every position in THE JOY OF SEX in one three-hour marathon session. It seems like a great idea until they discover that their most private video has gone public. In a panic, they begin a wild night of adventure – tracking down leads, roping in friends and duping Annie’s boss – all to reclaim their video, their reputation, their sanity and, most importantly, their marriage.

The release will also contain the Featurette ”Capturing the Moment” in which Cameron and Jason talk about what it was like to film the infamous sex tape created by their characters, including some awkward moments while filming, the hysterical positions they twisted themselves into, and what it was like for Jason to see Cameron in a bikini on roller skates.

Also included is the Featurette ”Meet Hank Rosenbaum”, in which Hank welcomes viewers into his luxurious Brentwood mansion for a tour of his renowned art collection.  He explains his love of art, showcasing three large oil paintings that he had commissioned, which were inspired by iconic fairy tale characters, but with his face replacing those characters.  The tour continues into Hank’s world as we meet his German Shepherd, Ariel.

The Blu-Ray version will also include Bloopers and a selection of Deleted & Extended Scenes, as well as Line-O-Rama, footages of alternate takes on the jokes.

The Featurette ”Romance Reboot with Dr. Jenn Berman” is also included, in which a well-known relationship expert gives audiences advice on various relationship topics, including the best ways to keep things fresh in a relationship, tricks for increasing effective communication, rescue remedies to salvage a waning sex life, and much more.