For almost ten years Ed Harris harbored the idea to make a movie about the late painter Jackson Pollock. After having received a biography of the modern painter by his father, Harris was intrigued in the life, the antics and the art of this remarkable painter and decided to one day make a film on the subject. The time has come and Ed Harris has co-produced, directed and acted in “Pollock” to great success and critical acclaim, bringing to life moments of the artist’s life in a way that makes the character tangible and in a way more understandable.

Guido Henkel: What attracted you most to Jackson Pollock? Was it his work or he as a character – or can you even separate the two? 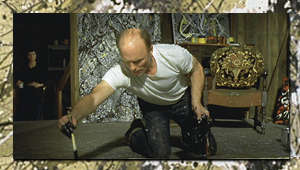 Ed Harris: Initially it was his character, but ultimately you can’t separate the two. But something about his struggles as a human being spoke to me. I just had an understanding for how complex he was, where his problems were. His fears, his isolation, his need to find a way to deal with that – which he ultimately did through his paintings.

The film got more and more personal
as time went on and I was working on the material.

Guido Henkel: The film must be a very personal one for you, since you produced, directed and acted. Was this a project that you carried around or all this time, knowing that you HAVE TO DO it? Was it a vocation?

Ed Harris: Yes, it started in the late 80s in the 90. I was working on the project on and. I have always been committed to do it, come hell of high water. Initially I had no plans to direct it myself, until about a year before we shot it. This was a project I felt compelled to follow through, and it is very personal to me, and it got more and more personal as time went on and I was working on the material.

Guido Henkel: When you looked at the project, you were certainly aware that this is not a very commercial film but Arthaus material. Did it ever bother you that the importance of Pollock may be lost on most people, that they don’t recognize his importance as a painter?

Ed Harris: Not particularly. People will learn or find out about who they want to, or what is put in front of them. I’m not responsible for enlightening the world. I just wanted to make a film about this guy and I’m glad people are interested in seeing it. I think as years go by it will stand the test of time and actually gain in importance.

I’m not responsible for enlightening the world!

What bothers me about this country however, is that the arts are not supported enough. A lot of the school systems now barely have art programs, if at all. When I went to school it was part of the daily curriculum. I find that very disheartening and hope it will change. 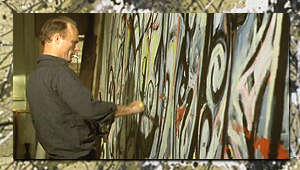 Guido Henkel: Do you paint yourself? Some of the painting scenes in the film are utterly realistic and it makes you wonder if that was just Hollywood magic or real?

Ed Harris: I wouldn’t call myself a painter. I do like to paint, though. I have worked on a few things, yes, but I don’t think of myself as a painter. To me, a painter HAS TO paint, and I don’t have to. I’m an actor.

As part of this film, I always thought it was important to see the man paint. That’s what the movie is about. I didn’t want it to be a double, or somebody else’s hand. I wanted the man to do it and the audience to see him at work.

Guido Henkel: “Pollock” was your first film as a director. When you went to work, which director did you find influenced your work the most?

Ed Harris: I don’t think I consciously oriented myself. The one that I was aware of more than anything else was Victor Nunez, who I worked with in 1983 in “A Flash Of Green.” Victor is not afraid of letting the camera reveal things. It is a very simple technique but highly effective. Time exists for itself in his films and I, too, felt that was important. The film was not so much about getting to know the guy, but spending time with him.

Guido Henkel: Especially with biographic films it is always hard to condense the immense wealth of information and facets of the personality into a 2-hour movie in order to properly do justice to the person depicted. Was there ever a time where you felt you had to sacrifice an important aspect of Pollock’s life or personality, did you ever feel that you missed an important part?

You got an 800-page biography to work from and whichever page you choose, there’s always something interesting there

Ed Harris: You got an 800-page biography to work from and whichever page you choose, there’s always something interesting there. The more I worked on it, on the script, in the editing room and shooting it, the easier it became to condense material. I was talking with my wife about what a script is the other day, and it actually the first sentence of every paragraph of a novel. It is only when you start shooting the script that you start writing the entire paragraph, really penetrating the material. 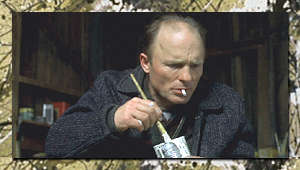 As I worked on it, I found that a lot of information was simply irrelevant in terms of the film I was making. It was about this guy and not so much other stuff. I would have been pleased to make 2-hour film about 2-hours of his life, if I had known how to do it. That’s what I wanted. To just inhabit the man, and witness him, and experience it for myself. That was part of the desire.

It took years to make. I worked on the script for 8 year, and it wasn’t easy. There are a lot of scenes that we shot that weren’t in the film in the end. But at the same time, there were a few scenes I wish I had shot. Ultimately, I wanted to make film that doesn’t run much over 2 hours and I’m really proud of it. What it is, is what it is.

Guido Henkel: The music of the film plays an important part in “Pollock,” creating a certain emotional attachment of the viewer to the character, even if viewers may not always understand his state of mind. How did you approach finding the right soundtrack?

Ed Harris: Good question. Jeff Beal was actually the third composer on the project. I was not pleased with the first two. It didn’t work with the film. At the same time, you know there is some music that will work. There were some influences that we were following, and some were not quite right. I talked to Jeff about it and showed him what the film was about. His stuff was working, and he kept working on it and in the end I was very happy with it.