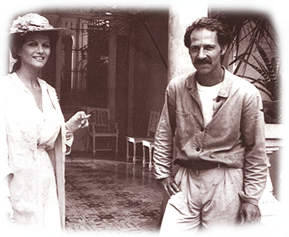 Werner Herzog is one of the few directors who truly inflect themselves in their work. Instead of visually interpreting someone else’s work, Herzog decided early on in his career as a filmmaker that it was important for him to have full control over everything he does. As a result, he is the writer, producer and director of practically all his films. As an immediate consequence, every film, and every image within these films are an implicit part of Werner Herzog. We don’t simply see an operatic director at work, but someone who gives a part of himself and of his life to create a piece of filmed art that will remain for generations to come.??When talking to Werner Herzog, one can’t help but be impressed by his passion for filmmaking, the real, traditional movie magic, and it almost seems as if you are sitting opposite of “Fitzcarraldo”, the real life version. 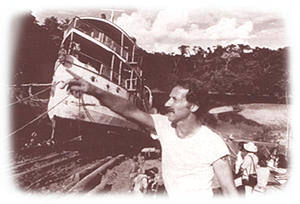 Werner Herzog is also a lover of the Opera and over the years has staged and produced many productions from the world-famous Opera-Days in Bayreuth, Germany, to Milano, Italy all the way to Washington DC. His love for the opera and the dramaturgy used within them can often be found as part of his films, and his movie “Fitzcarraldo” is one of the prime examples. It is the story of an obsessed visionary – not unlike Herzog himself – who plans to build an opera house in the jungle of Peru. Beautifully photographed on location in the wild jungles of the Amazon and orchestrated with classical opera music, the film has become one of Herzog’s most acclaimed and most renown films. While audiences around the world may show specific preferences for particular films, Herzog himself would never overly emphasize any of his works. All of them play an equally important part in his life and creative career. When asked which of his films is his personal favorite, he explains “You can’t speak of favorite movies. You wouldn’t ask a father, ‘Which one is your favorite child?’ Of course, “Fitzcarraldo” is close to my heart. It’s not only just a movie, it’s really my life.” 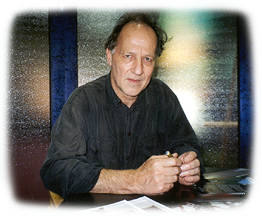 Herzog is harboring very strong and ubiquitous thoughts about his many films. Having directed 42 movies in his long lasting career, he feels they all are equally important to him. Of course, he is not disappointed about “Fitzcarraldo’s” overall acceptance by the public. “I am very glad it just keeps going,” he comments. “It has not stopped ever since [its original release in 1982]. Probably because it doesn’t age, just as Nosferatu doesn’t age.” His observation has certainly some validity. Looking at “Fitzcarraldo” today, 17 years after it was first released, the film is indeed timeless. It is a unique feature many of Herzog’s films sport. “I don’t really know what it is,” the director ponders. “But in “Stroszek” for example, only the cars in the film give away its age. The film itself is ageless.” 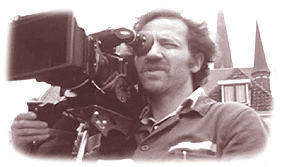 Much of “Fitzcarraldo” is quite unique and equally impressive. Not only is it an intriguing and sometimes bizarre story about a man who is literally moving mountains to fulfill his dreams, for the filmmakers it was a production that took the cast and crew to the edges of their abilities. What may seem like a dreamy scenario in the middle of the Peruvian jungle at first, turns out to be a real-life undertaking that was painstakingly arranged and documented by Herzog’s camera. The film boasts an incredible sequence in which Fitzcarraldo sets about to have his entire ship moved over a mountain to bring it back to water on the other side. Where most other filmmakers would have opted to go for miniatures and special effects shots, Werner Herzog decided for the real deal. What you see on film is what really happened. A huge aisle was cut in the jungle and the ship has been actually pulled over the hilltop to the other side. It makes a truly memorable movie moment even more weighty, as we know the filmmakers and actors went through the strains to bring this part of the story to utterly realistic life. Werner Herzog remembers these scenes quite vividly. “At the time digital tricks didn’t exist,” he explains his reasoning for the procedure. “The question at the time was, whether we should do what you call the ‘plastic-solution’. We could have pulled a miniature plastic boat over a studio hill or somewhere in a botanic garden, pretending this was a real ship in the jungle. I always had the feeling that audiences should be back to where they trust their own eyes again.”

His concern for integrity and to keep the movie magic alive was ultimately the flame that kept him, his cast and his crew going as they spent weeks in the jungle, trying to achieve the impossible themselves. To get away from the overly special effects driven approach of modern filmmaking, Herzog decided to go the extra mile to gratify audiences, and the pay off in the movie is immense.?
“Everybody, children five – six years of age know ‘this was a technical trick’ these days, and they even know exactly how it was done. They are very sophisticated and know exactly how the effects in “Jurassic Park” were created, and how “Star Wars” came together. I feel that giving the audience something back that they have lost, is something important.” 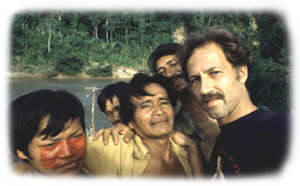 But apart from going back to the roots of filmmaking, another, more practical side-effect of the undertaking appealed to Herzog as a director. “Pulling a ship of this size over a real mountain in the jungle in the middle of nowhere creates a great many moments of unexpected texture and wildness and ferocity,” he points out enthusiastically. The stress, the fatigue, the breaking of branches and ropes, the sounds of the jungle, the sweat and everything around the scenes is what ultimately makes them so alive and intense. “I pulled the ship over the mountain not for the sake of realism,” he confides. “What you actually see is a very stylized thing. It looks like an operatic event, like a dream-event, and that’s what’s so strange about it. It’s not really a paradox.” 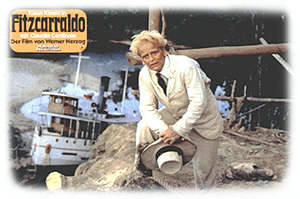 The entire set-up defines Werner Herzog as a person and as a filmmaker. Just like his titular hero “Fitzcarraldo” he has always been a man of visions, following his somewhat eccentric instincts to make the films he wanted to do. In the course of it he was repeatedly working with Klaus Kinski, the late and infamously eccentric German actor. For most directors and producers, Kinski was impossible to work with, but Herzog managed to create a practical relationship with the actor that seemed to work for both of them. Over the period of fifteen years, the two made five films together, and in 1999 Herzog has created a monument to the actor with his film “My Best Fiend – Klaus Kinski”. Nonetheless their relationship was not without friction, and ‘I had to domesticate the wild beast,’ as Herzog put it himself. “Cobra Verde” was their last film together in 1988 after a highly publicized fallout, only three years before Kinski’s passing away.

Ultimately the two have had a common denominator. Their similar integrity and their ferocity that forced them to push themselves to limits no one else was willing to follow them to. “I owe Klaus Kinski a lot, even though it was a nightmare to work with him day after day after day,” Herzog remembers the actor with a smile. “But that really doesn’t count any more, because what counts is what we have got on screen – the result. Kinski was only part of it, because I have done other films without him in it, like ‘The Mystery of Kaspar Hauser’, or ‘Stroszek’, or many others. I’ve done more than 40 films by now. I think there is something inside of me that pushes to such limits and pushes to such vitality. I don’t know exactly what it is and we should not speculate. Let’s take the films as they are.” 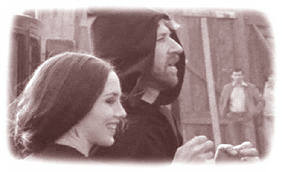 Taking films the way they are, shows another one of Werner Herzog’s implicitly naturalistic sides. Where George Lucas goes back to work on films he did 20 years ago, in order to fulfill his vision, Herzog has no ambitions to do anything like that. In fact the thought of remodeling his own work appears to be an almost disturbing, blasphemous thought to the filmmaker who defines himself so much through his films. The feeling of gratitude and satisfaction he has when completing a film, always knowing he did the very best he could with any project at any given time, is what gives him the chance to scrutinize his own films years after their production, still with a smile and a load of fond memories.

“To me it’s like a child,” Herzog elaborates thoughtfully and brings forth a very suitable comparison. “Once it is born, you just don’t tinker with it any more. You give it a chance for life, and do the best you can so its going to grow up the way it has to be, and the way it wants to be. Eventually it will develop its own energy and its own shape, and that’s exactly what happens to movies that we put out.” 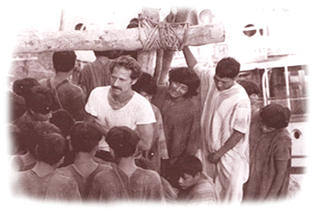 In complete unison with every bit of his accumulated work, Werner Herzog does not regret any of the films he made, or any of the decisions he made during their course, an honesty few directors can really afford. That is in part because many decisions are imposed on them, naturally leaving them unhappy to some extent. To avoid these pressures and outside interference, Herzog has early on started to set up his own Production Company and worked as an auteur. He was always the man behind his movies, producing them, writing them and directing them, without much third party involvement. It ultimately gave him the freedom he needed and searched, the freedom to make the films he wanted, and the freedom to make these films the way he wanted them. It allowed him to make his films very personal, too, throwing in a piece of himself into each and every one of them.

“In my case there is a strong element of myself in all my films,” he explains his working methods. “I always write my own screenplays, I always direct my own films and I always produce my films. That gives some sort of coherence, and I don’t have to fulfill the needs of other people. I don’t get grumpy about a writer who has written a stupid scene, and is touchy about altering it when you as the director see it doesn’t work while shooting it. After four repetitions I know there’s something wrong with the writer – and that writer is me!” 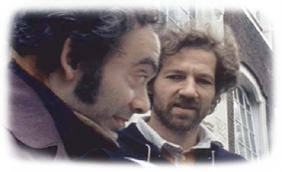 Werner Herzog may not have the profile or recognition of many other filmmakers in the industry, but he doesn’t seem to mind at all. He has never been out for fame and fortune. Like many of the protagonists in his movies, he has had a dream all his life, and everything he did was to fulfill his own dreams. To go to the limits and do things no one else dared to do. As a result Werner Herzog has given us some unique films that easily stand the test of time and show that good filmmaking has very little to do with showmanship, glamour or facades. ?
Good films come from the heart, and if any director has his heart in his films, Werner Herzog is right there on top of the list.