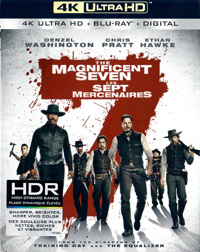 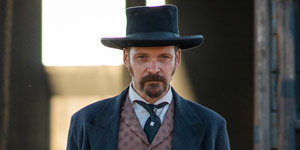 When Akira Kurosawa made Seven Samurai in 1954, little did he know that he was not only creating a masterpiece of a film, but also a story that would resonate so loudly across the world that it would spawn countless other stories and movies revolving around the same plot devices.

As film lovers know, Seven Samurai was remade in 1960 as the Western The Magnificent Seven starring Yul Brynner, Seve McQueen, Charles Bronson, and Eli Wallach, showing, just how translatable to material was to other cultures. The John Sturges-directed movie became a beloved landmark in its own right, so, perhaps, it is no little surprise that Hollywood would eventually revisit the property.

And so we have The Magnificent Seven, the remake, adapted to 21st century sensibilities and with some slight story changes.

When miner and land baron Bartholomew Bogue (Peter Sarsgaard) discovers the riches surrounding hills of the small town of Rose Creek, his plan is simple. Drive the settlers out of their homes with fear, or kill them if they won’t oblige and get in the way of his new enterprise. To underscore his point, he rides into town with his posse, burns down the local church during service and begins shooting people at random.

Emma Cullen (Haley Bennett) is one of the townspeople and she is not willing to give up so easily, especially since one of the victims was her own husband. Determined to get her justice, determined to make her life the way she had intended, she asks Sam Chisolm (Denzel Washington), a traveling warrant officer, for help and promises him to pay him with everything she owns.

Impressed by the young woman’s determination and the feeling that a sever injustice is being done, Chisolm agrees and begins gathering around him a small group of gunfighters and warriors. Together, these seven men, stand up to Brogue, execute a number of the blackguards keeping the townspeople in fear, and begin outlining a battle plan for when Brogue will arrive in strength to hit back.

They use their own skills to teach the townspeople, but more importantly, they take a smart strategic approach to the situation that appears utterly hopeless. Making the most of the town’s own resources and geographic location, they set up for the inevitable battle. And yet, when Bogue arrives on the outskirts of town with an army of hundreds, it becomes clear that the homegrown militia feels entirely out of its depth. But fight, they will… 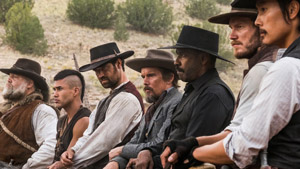 I was unsure what to make of this remake at first but very quickly the film’s beautiful cinematography drew me in. Magnificent vistas of the West, combined with beautiful angles, instantly made the film incredibly watchable. When the story kicked in, the rest of the machinery clicked into gear and the entire train was in motion. Where Suicide Squad was utterly ham-fisted when introducing its array of different characters, The Magnificent Seven is cinematically eloquent, creating vignettes for each character that blend into the story and never feel tacked on or superficial. In fact, in some cases, they mesh so well that you don’t even get the sense they are character introductions until you realize the scene actually served to establish a new main character. It is marvelously done and becomes part of the overall fabric of the film, rather that a grating origin story.

In addition to their introductions, each character is also nicely delineated with character traits. some of them we learn about from the got-go, others are unveiled as the story progresses. While these characterizations may be very much on the formulaic side, I found them never detrimental to the overall experience. In a sense, the whole film follows a formula. Heck, it is the formula. And yet, it is not, as you will see. 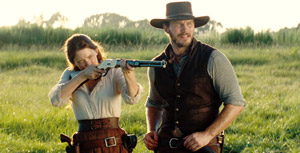 Ultimately, it is the cast that carries the film and with Denzel Washington in the lead, we get a well-rounded Sam Chisolm who is likable but has an underlying determination that never wavers. He is the cornerstone of the entire crew of seven, supplemented by great performances by Ethan Hawke, Chris Pratt, Vincent D’Onofrio and others.

I mentioned before the incredible look of the film, and I am pleased to say that watching The Magnificent Seven as a 4K UHD presentation is a truly magnificent experience. (Excuse the pun.) With the extended dynamic range that the HDR transfer offers, the image offers a visual depth that runs from the deepest blacks to the brightest highlights within the same frame, making sure every detail, whether it is in the shadows or the highlighted areas, is properly exposed and rendered at all times. It is quite something to behold, particularly in the vista shots that emphasize the natural beauty and visual richness of the landscape. colors are equally strong and vibrant. Never bleeding or oversaturated, the transfer renders an accurate impression of the locations and sets, as if you were there yourself. In short, it is a transfer only 4K UHD can deliver and a direct comparison to the Blu-Ray version that is also included in the release, only underscores that impression.

In terms of extras, all of which are found on the Blu-Ray Disc in the packaging, the release contains a “Vengeance Mode,” which gives you access to additional information about the movie’s production, as the director and cast members discuss the creation of key scenes in the film.

In addition, six behind-the-scenes featurettes are part of the release, giving you a closer look at the making of the film, though most play more as EPK snippets rather than in-depth explorations of the subject matter.

A handful of deleted scenes rounds out the release.

What I do find a bit baffling, however, is the packaging of the release. It features all text in English and French. Even the title itself. Now, I understand that it saves money to have a multi-lingual release as a single SKU, but seriously, we can’t even have a proper card board sleeve in our language? In French of all languages? Spanish, I could understand, given America’s demographics, but how many people outside of Franco-Canada do speak French in North America? Bizarre, truly.

The Magnificent Seven (Or should I call it Les Septs Mercenaires?) is a movie that has been crafted with care and it shines through in the feature presentation of this film in every frame of the 4K UHD release. A finely nuanced script, in combination with a great cast and stunning cinematography, delivers a classic story without ever appear old-fashioned. It is a modern movie by virtue, set before a period backdrop, and director Antoine Fuqua makes the most of it. Check it out!