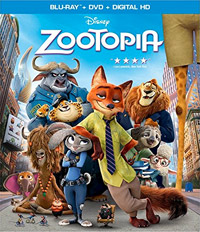 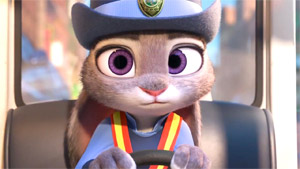 To be perfectly frank, I was not expecting anything special from this movie when I first dropped by my local theater with a friend to check it out during its theatrical run. Ever since the release of “Frozen” and its overhyped popularity, I was expecting this to just be another sub-par animated flick by Disney. I was pleasantly surprised, however, to see that it was so much more.

Introducing, Walt Disney Home Entertainment’s “Zootopia”, a cute and artfully crafted animated film that takes place in a world where humans never existed and, in our stead, average mammals evolved into sentient beings that learned to cope side by side, predator and prey alike.
? 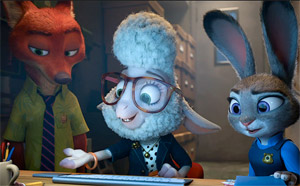 The story starts out with a young little girl bunny named Judy Hopps—note that there are an enormous amount of puns in this universe—fittingly voiced by Ginnifer Goodwin, who is notably known as Snow White in the hit TV show, “Once Upon a Time”. Judy has big dreams. She wants to grow up into a city cop, as revealed in an honestly cringe-inducing school play intro (which truly hits the nerve and will remind you of your embarrassing childhood plays forever nicely, so kudos to Disney).

After a particular schoolyard incident involving a fight between her and a bullying fox, her motivation becomes reaffirmed and we skip forward fifteen years to the point when Judy Hopps graduates from Police Academy. With a shiny new badge and her dreams soaring higher than ever, she finally moves to the big city, Zootopia, “where predators and prey live in harmony”—or so the advertising says.
? 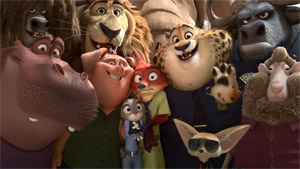 Here we’re soon introduced to a sly “pawcicle”-hustling fox named Nick Wilde (voiced by the on-point Jason Bateman), who bests Judy and makes her look bad in front of her superiors. As it all turns out, no one seems to believe in her, and not a one cares about what she thinks at all. With her dreams falling flat like a deflated balloon, she begins to second-guess about her life decisions, but an opportunity arises for her ambitions to be sparked up once again, and finally, she can prove herself worthy if she manages to solve a missing-mammal case in forty-eight hours.
Of course, that’s just the beginning plot that sets everything in motion, and I do not plan to spoil anything more for you.
?

“Zootopia” appeals very differently with me compared to Disney animated features like “Frozen.” There’s just something about this colorful world that just is incredibly charming and rich. I am certain it has to do with the whole premise of the world itself. We’ve all seen the anthropomorphic animal card being used in children movies before, but I believe the thing that is different about this one, is the fact that the filmmakers manage to make it all so relatable to us. By giving the world the appearance of a parallel universe to ours where laws and deeper, more humane mentalities exist, to give the movie a lot more depth than one would initially expect.

The messages and themes I’ve noticed while watching the film actually resonated with me greatly. I find the idea of using animal species as a medium to teach children tolerance a great one. To see both main characters having a really unfortunate childhood, simply as a result of being born a different race, is very sad, and the striking thing about it is that it’s true for our world just as well. Combining lessons of racism and bullying in a cute optimistic flick lasting over an hour and a half was a brilliant move by Disney.
?
But all that aside, the story itself is fun and thoroughly enjoyable. It combines soft and fluffy animals that all children love into a neat and well-plotted mystery adventure, which genuinely has a neat—albeit a tad predictable—plot twist at the end. 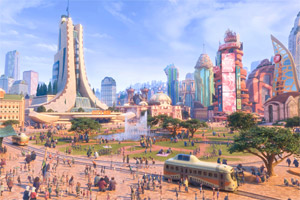 It’s not often that you find a movie that just seems to click with you, sucks you into its universe and just doesn’t seem to want to let go. For me, “Zootopia” is one of those films. It wraps itself around me very tightly. A uniquely diverse world, adorable fluffy characters with deep backstories, a mysterious story—all of it tied up with the ideals of our own morals. It’s one of those movies that really makes you wonder what else lies hidden in the city. Stuff that hasn’t been explored in the movie but mentioned in passing, like Outback Island or the great Palm Hotel and Casino in Sahara Square, as seen in the establishing monorail sequence. There is so much detail that has clearly been discussed in the concept stage of the production that it makes me curious to see if they’ll ever delve further into these underdeveloped areas in a sequel, perhaps.
?
Speaking of concepts, there’s a regular cornucopia of bonus features on the disk if you happen to pick up the Blu-Ray copy of the movie (which I highly recommend as it includes the DVD version along with a redeemable digital copy). There’s an assortment of deleted scenes to discover and a look at the characters (which include some of the conceptualized storyboards from the early stages). You will also get an in-depth look at the production of its high-quality models and animations.
Then, there is a miniature documentary on how the story was first written as a noir James Bond-styled spy movie, to a dark dystopian universe where predators had to wear shock collars, all the way to its final concept that we are familiar with today.

There’s also an extra that discusses how crew members did their research on the mammals dropped into this world by visiting zoos and taking notes on their behaviors and even fur styles.

Then comes a personal favorite of mine, the “Z.P.D. Forensic Files”, which is, in short, an easter egg spotter. 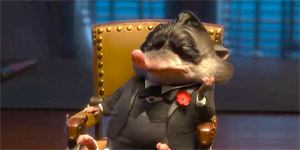 There are so many little nooks and crannies in this movie that I thoroughly love. There are countless references, tiny jokes and gags posted throughout that I kept noticing new ones with every repeat viewing. You even get wicked pop-culture references that just made me die in my seat. Don’t even get me started on “The Godfather” and “Breaking Bad” references.
?
Not only that, even the smaller side characters were very notable in this film. I can’t even begin to tell you how many people I know fell in love with Finnick, the fennec fox, even though he was on screen for only a few minutes for the entirety of the movie.

As you can certainly tell by now, I truly adore this movie. I can easily say that the advertisement testimonials at the time of its release weren’t just massive hype. This is quite honestly the best standalone Disney movie I have seen in a long time since their heyday back in the 90s. If I were to rate the movie by the skill and prowess of the animations and 3D models themselves, I’d give it an A+ as well, as each crafted model has been provided with beautifully fluid animations and the level of attention and dedication evident in each creature, down to their distinct fur coats.

If there was one thing that felt rather underwhelming, it was the score for the movie. I don’t know if it’s just me, but when I first saw it in theaters, the only time I actually paid attention to the music was in the runaway train sequence, during the film’s last half hour.

However, that being said, that is my only complaint, other than the fact that the official song of the movie—featured once in the opening and once in the end credit concert—“Try Everything” by Shakira—or literally just Gazelle in the film’s world—is just way too dang catchy for its own good (or at least for my own good). Everything else I just love to absolute bits.

So if your kids are asking you to buy or rent “Zootopia”, be sure to give it a shot. Just a fair warning, though. You may end up like me and plan on the disc to a friend’s house, just to watch it yet another time. (Seriously, I don’t think it’s healthy at this point.) “It’s called a hustle, sweetheart.”