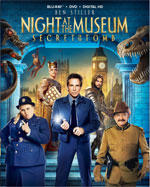 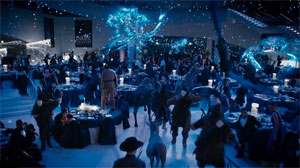 One would think that the originality of “Night at the Museum” is wearing a bit thin after three films, but quite the opposite is actually true. Always dishing out new angles on the premise, the films are not only extremely entertaining but every installment is also very refreshing. I was therefore eagerly looking forward to taking a look at the Blu-Ray version of this family comedy when Twentieth Century Fox Home Entertainment sent over a copy.

Larry Daley (Ben Stiller) is making the best of his job as the night watchman at the New York Natural History Museum where all the exhibits come to life at night. He uses the exhibits to create dazzling displays of apparent magic for special events, helping to keep the museum in everyone’s minds, and therefore well funded and afloat. 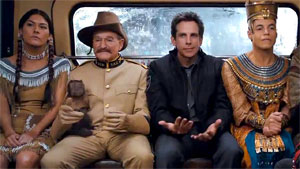 But something is happening the golden tablet that brings the exhibits to life is showing signs of a strange tarnish that begins to eat away at the relic. The magic is dying and with it, so are the exhibits. The only person who knows the source of the magic and might be able to reverse the curse is Akhmenrah’s (Rami Malek) father, the pharaoh Merenkahre (Ben Kingsley) who is on display at the British Museum in London.

To save the magic, Larry and Akhmenrah travel to London but soon realize that they have a whole bunch of stowaways in their luggage. And so it is that the whole gang, including Teddy Roosevelt (Robin Williams), Sacajaweah (Mizuo Peck), Jedediah (Owen Wilson), Octavius (Steve Coogan), Attila the Hun (Patrick Gallagher) and Dexter the monkey, all walk the halls of the British Museum, trying to take their destiny in their own hands. Accompanied by a host of new characters that includes Sir Lancelot (Dan Stevens) and Laa (Ben Stiller), instantly complete mayhem ensues as the exhibits of the British Museum are brought to life for the first time as a result of the tablet’s magic in their midst. 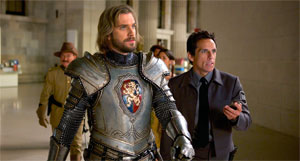 As I mentioned in my opening, the real beauty of these films is that they each offer intriguing stories that differ from each other so dramatically that the originally premise of museum exhibits coming to life never feels stale. Add to it the incredible sense of humor that will have you laughing out loud every few minutes, and “Night at the Museum: The Secret of the Tomb” is once again an absolutely magnificent romp for the entire family.

Naturally, it is also great to see the same cast together in this film, expanding on the incredible chemistry they have exhibited on the previous films already. It translates directly onto the screen and oftentimes the banter between characters is just as hilarious as the actual comedy bits. It is a very sad aspect however, to realize that this was Robin Williams’ last film and that Mickey Rooney also passed aways just after the film’s shoot. Both will be forever missed. 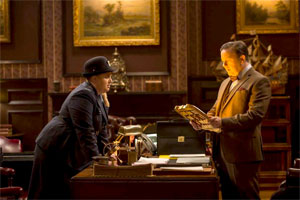 Twentieth Century Fox Home Entertainment is presenting the movie in a pristine 1080p high definition transfer on this Blu-Ray Disc. It is entirely devoid of any blemishes and is reveling detail like there was no tomorrow. Every hair, every seam, every skin pore, every bead of sweat is evident in this transfer, making it a pure joy to watch. In addition, the transfer boasts strong colors that bathe the screen and help create the warm and inviting look of the movie. Add to it the solid black levels that root the image with deep shadows, and you have a universal winner on your hands.

“Night at the Museum: The Secret of the Tomb” comes with a DTS 7.1 HD Master Audio track that is exploding in your living room. Incredibly aggressive and active throughout, the surround channels are constantly engaged to create a sound filed that completely envelops you. A wide frequency response with solid bass extension adds to the experience, making a surprisingly strong showing of this film’s soundtrack.

The release also offers up a number of bonus materials, including a selection of deleted and extended scenes. For the most part the excised scenes are interesting but have been removed for good purpose, and the extended scenes have also been shortened in the final cut because they have a tendency to be a bit too talky. 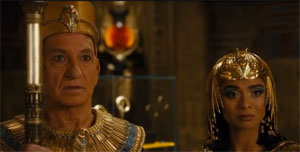 The heart of the bonus features, for me, is a featurette with bloopers and ad libs, called “Improvs, Absurdity andCracking Up.” Check it out for some hilarious moments on the set.

A number of other featurettes are included on the disc, giving you a better look at the production and the personalities involved, but also take you around the British Museum and discuss subjects covered in the film.

A Visual Effect featurette allows you to see how some of the cool effects have been put together. Instead of technical talk, it is a more of a demo reel, layering effects on top of each other in stages, to see the progression and how these effects have been built form the ground up. 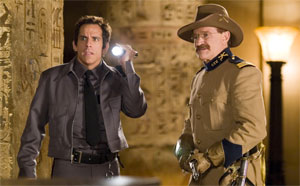 A commentary track by director Shawn Levy rounds out the release, in which he discusses many aspects of the movie and also reminisces about the franchise as a whole. It is quite evident that he loves these films and that he enjoyed making them tremendously. It is an enthusiasm that clearly shows on the screen, I think, in its looseness and off-the-cuff comedy at times. Levy is a director who encourages his actors to go for broke and oftentimes these moments make it into the final film for great effect.

“Night at the Museum: The Secret of the Tomb” is incredibly entertaining and definitely worth checking out. Don’t waste time, grab yourself a copy and have a go. You will enjoy yourself and you will laugh. I promise it, particularly when you have children around, who will get a real kick out of the absurdities at times and infect you with their own laughter.