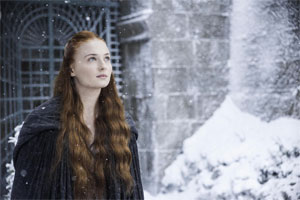 I have to admit that I found Season 3 of “Game of Thrones” somewhat disappointing, as it seriously lacked in focus. With way too may plot lines going on at the same time, the show felt anemic and was meandering aimlessly from character to character, from episode to episode. When Season 4 rolled around, I was therefore a little reluctant in my enthusiasm, and even the spoilers that had been forced upon me thanks to some of my Facebook friends could not change that. Still, when HBO Entertainment sent over the complete fourth season Blu-Ray set, I was eager to take a look.

As Daenerys Targaryan continues to build her army and rapidly grows the number of her followers by freeing the slaves of Meereen, the Lannisters are celebrating the wedding of King Joffrey. But things quickly escalate, just as you would expect in that family, as intrigue and politicking continues. 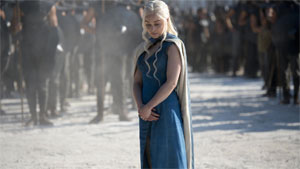 Meanwhile in the North, Jon Snow is trying to warn the men of the Night’s Watch of the impending assault by Mance Rayder and his followers, but everyone is discounting his mentions of an army 100,000 men strong for lunatic rants of a man who has taken sides with the wildlings.

The show picks up where Season 3 left off, but fortunately for viewers, it appears that the writers have also realized that there were way too many plotlines going on at the same time, giving each line a mere few minutes of screen time per episode. To counter this degrading of the show’s quality in this season, the writers very quickly begin to consolidate individual plots lines and pull them together for a much more cohesive feel. This way, the show picks up speed again and begins to ramp up to form. Within half season you will find that the show has made good progress—things have actually happened, unlike in season 4 where virtually nothing happened—and by the time you reach the last two episodes of the season you will be exposed to a full-fledged assault. I mean this literally, because these two episodes focus on one major plot point in the narrative for the most part, without deviating too much, without distractions, creating an experience that is much more reminiscent with a movie than a TV show. Powerfully, it thrusts itself into your living room, heaps the action and the drama upon you, leaving you breathless in its wake. And with that, Season 5 of “Game of Thrones” ends on an incredible note that is promising and energetic. No doubt, you’ll be wanting more of it, and you will be eagerly awaiting the show’s next season. HBO Home Entertainment is once again delivering a release that is top notch and can compete with the best titles in the market, both production wise, as well as presentation wise. Offering up the show in its 1.78:1 widescreen aspect ratio, the transfer is incredible detailed and rich. Colors are strong and vibrant, rendering the world in tones that are both natural, yet at the same time gloriously rich. With incredible detail, the high definition transfer brings out every little bit in the lush production, from individual hairs to seams in the costumes and the texture of fabrics and materials. Black levels are remarkably deep, giving the image plenty of visual depth and making sure shadows properly root the image. Not a hint of compression artifacting is in evidence anywhere.

The release is accompanied by a DTS 5.1 HD Master Audio track that is equally impressive with incredible surround usage. Aggressive and full-bodied throughout, the track puts the viewer right in the midst of things while making sure dialogues are always clear and understandable. 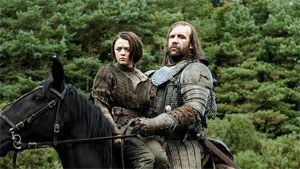 “Game of Thrones: Season 4” also contains a number of bonus features, such as bloopers and deleted scenes. In addition you can find a host of featurettes on the disc, covering various aspects of the production. Filled with interviews and production footage, as these featurettes explore the world, the cultures, and the characters, old and new, in more detail.

Naturally there are also a number of commentary tracks on the release, featuring cast and crew members, as they watch the show’s episodes along with you, reminiscing about the production, the problems and challenges, the people and the story. 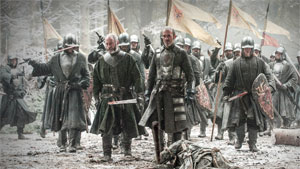 Emerging incredibly strong from a lackluster season 3, “Game of Thrones” plays its muscles once again by focusing on proper storytelling and the importance of drama and suspense. Without watering down the narrative or getting lost in the web if plot lines, the storyline is much more cohesive and allows for the events to impact the viewer on an emotional level, while also hooking the audience and keeping you on the edge of your seat as you eagerly await the next turn of events.

“Game of Thrones: The Complete Fourth Season” comes in a beautiful black fold-out packaging that is graced only by the image of an embossed raven along with the logo. Clearly, it is a release you will have to check out, particularly if you are a fan of the show. But even if you are only a casual viewer, with its strong focus back on its roots, this season is definitely giving you a run for the money. Take note!