Brett Ratner is not the first director that would jump to mind to helm a fantasy movie, but at the same time, why not? He should no more be typecast for action comedies than an actor should. In fact, it was this unexpected match-up that got me intrigued in “Hercules,” and I decided to checkout the Blu-Ray Disc when it arrived in our offices.

We are all familiar with the legendary exploits of Hercules, as outlined in Greek mythology, and if you are not, you should definitely pick up a book once in a while. The son of Zeus and the mortal woman Alcmene, Hercules was born a demi-god with superhuman strength, but always being outcast from Olympus. Hera, Zeus’ wife despised the bastard son and constantly threw obstacles in his way. But she agreed one day to put an end to her harassing the young man if he were to complete twelve challenges she put in front of him. And so the legend goes that Hercules went through the Twelve Labours and rid the lands of some of the most dangerous mythical creatures. 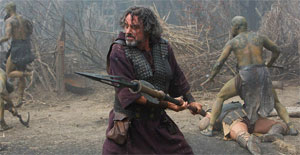 Naturally, such feats do not go unnoticed by the public either, and eventually every ruler in the country – and there were many in Greece in those days – tried to win Hercules for their purpose, using him as a strongman to end discussions and lead armies into war. And so, Hercules (Dwayne Johnson) and his companions find themselves in the court of Lord Cotys (John Hurt) one day, who asks for their help. His castle and the surrounding villages are threatened by the armies of Rhesus (Tobias Santelmann). Fearing for their lives, Lord Coyt asks Hercules to train his commoners into an army that can withstand the coming onslaught of bloodshed. With the help of his reputation and the combined abilities of his companions, Hercules is trying to forge an army, but it is easier said than done, especially since the enemy is moving fast.

“Hercules” features a solid supporting cast, including Ian McShane, Rufus Sewell, Joseph Fiennes and Rebecca Ferguson, to name just a few, making sure the film’s characters are represented with their respective nuances. Unfortunately, the script itself doesn’t add a lot of depth to nay of the characters and ultimately plays like an action rollercoaster in a fantasy setting. The plot us nigh forgettable. While starting out with a bit of intrigue as to the identity of Hercules, the movie quickly abandons the mystery altogether in favor for pure-frenzied action sequences and a plot the is driven forward by nothing more than a simple conflict and betrayal story.

The action sequences are top notch, however, and the filmmakers used some inventive silhouetting to create the centaur imagery, although I guess I am still chuckling at that strange flanking maneuver they executed when they first encountered Rhemus’ army. It made no sense at all and defeated the entire purpose of an ambush flanking maneuver, which is to create a second front and limit the enemy’s ability to maneuver. Ah, Hollywood, and the creative liberties it takes to make things look pretty. You just have to love it.

Ultimately, “Hercules” is a bit overbearing. Too pompous for its own good, I think, it offers little substance and tries to make up for it with great imagery and large-scale battle scenes. The moment with the Nemean Lion is clearly one of the most beautifully conceived shots in recent fantasy memory. The film’s approach works to a degree if you don’t raise your expectations too high and simply allow the movie to scoop you up and take you for a ride. 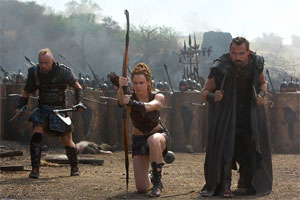 The Blu-Ray presentation on this release from Paramount Home Entertainment offers a 1080p high definition transfer in the film’s original 2.35:1 aspect ratio. Absolutely clean and without even a hint of a blemish, the transfer is at the top of its game. Razor-sharp edges and an incredible level of detail throughout make this film the perfect showreel to impress upon people about the benefits of true high definition and packaged media. No single streamed media can come even remotely close to the definition on display in this transfer, or the color reproduction and solid blacks. This is a reference transfer, hands down.

The same is true for the 7.1 channel DTS HD Master Audio track, which offers an incredibly aggressive and active surround sound filed. With its deep bass extension, it gives the audio presentation a solid foundation, while high ends of the audio spectrum are reproduced clean and without distortion. Just like the images on the screen, the audio is a bombastic mix that throws you in the middle of the action and pulls you along with its sonic assault on all channels. Dialogues are well integrated and always understandable, without being drowned out or overpowered by the music or sound effects. 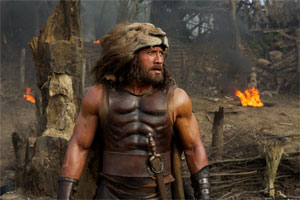 The Blu-Ray version features the theatrical cut of the film as well as an extended cut running three minutes longer. In addition, you will find 15 deleted scenes on the disc as well, along with a few featurettes, covering the production of the film, as well as the mythological icons that served as the underlying inspiration.

The centerpiece of the bonus features is undoubtedly the commentary track with director Brett Ratner and producer Beau Flynn, in which they discuss the making of the film and the approach they took to bringing this mythical hero to life on the big screen once again.

A DVD version, featuring the theatrical cut of the film is also included in the release.

“Hercules” is a summer movie that has blockbuster plastered all over. It is a big show-off piece with tons of action, tons of bloody, large-scale battles, supersized monsters and a solid cast to boot. It is a popcorn movie and if you decide to take it for what it is, “Hercules” is actually good fun, though despite the onscreen spectacle, strangely unspectacular.