In the best tradition of Hammer films, “The Doctor and the Devils” is perhaps truer to the Hammer formula and look than many of the late Hammer films themselves were. The similarities are not a coincidence,actually, as a quick glimpse at the credits quickly reveals. The movie has been directed by none other than Hammer veteran Freddie Francis, who created some of the most visually striking films the studio ever put out.
Nonetheless, “The Doctor and the Devils” is a film often overlooked, but is filled with the gothic flair and the grave robbing antics of a true Victorian era horror film.

In “The Doctor And The Devils” we witness the true story of Dr. Thomas Rock (Timothy Dalton), a surgeon in Victorian London who is determined to further the world’s knowledge about the human anatomy in order to perform proper surgeries, understand the workings of the human body and thus remedy ailments and diseases that plagued the world at the time.

However, the system doesn’t make it easy for him. With ossified quacks at the head of the Medical Academy who try to keep the profession in the dark ages, he has trouble obtaining bodies to dissect and perform his anatomical studies on. He is being allocated only a limited number of the bodies of hanged criminals by the government, and it is not nearly enough to fulfill his needs. As a result, Dr. Rock is beginning to pay grave robbers to steal bodies freshly from their graves. Two men, Fallon (Jonathan Pryce) and Broom (Stephen Rea), see this offer as their opportunity to riches. They begin providing Dr. Rock with the freshest bodies they can find, but when the dry spells between deaths become too long for their gin-guzzling tastes, the two men begin murdering people for the sole purpose to sell their bodies to the doctor. But for how long can the doctor turn his head from this obvious criminal behavior in order to further his studies?

The film features a wonderful cast. Timothy Dalton is stone cold and calculating as Dr. Rock, completely obsessed with his ideals and intentions, not once stopping to ask the ethical questions surrounding the bodies that appear on his operating table. It is, however, Jonathan Pryce and Stephen Rea, who leave the most lasting impression as the remorseless grave robbers-gone-murderers. Especially Pryce becomes a regular killing machine and teeters on the edge of madness, and the actor gradually changes from a fairly likable character to a complete maniac, one step at a time.

The movie’s production design is also wonderful, rendering a city that is supposedly representing London as a cesspool of filth and dirt. Dark and brooding, it is run-down and unattractive, teeming with whores and drunkards on every street corner. This is what the East End must have looked like, and when the film first appeared, it was unusual to see the squalor of the Victorian era in such detail, although in more recent productions we have been seeing a lot more of these rather faithful reproductions of the time period. 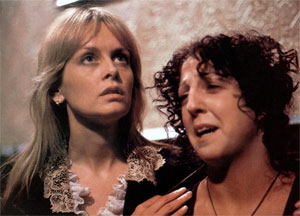 Add to that the wonderful cinematography that carries Francis’ signature all over, and you have a film that oozes atmosphere like the genre’s best.

Shout! Factory is presenting “The Doctor and the Devils” in a 1080p high definition transfer that restores the movie’s original 2.35:1 aspect ratio. the transfer is generally clean, although a few specks and blemish flicker across the screen at times. For the most part, however, it is clean and perfectly delineated with sharp edges and plenty of image detail. The bit of grain that accompanies some of the scenes adds nicely to the gritty look of the film without becoming distracting.

The color reproduction is perfectly bringing to life the atmospheric scenery with lush colors and natural flesh tones. Shadows are an essential part of the film’s cinematography and they are rendered with solid, deep black, giving the image plenty of visual depth without ever breaking up.

The Blu-Ray Disc features a DTS HD Master Audio version of the movie’s original stereo track. It is clean and clean, without problems. A balanced mix ensures that dialogues always remain understandable and are never drowned out by the music of the sound effects. A good dynamic range and natural frequency response also adds to the solid presentation of the film. 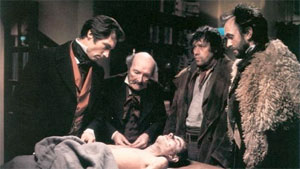 The release contains two extras that will surely please fans of the film. The first is a commentary track by film historian Steve Haberman in which he discusses the background of the movie, its cast and the anecdotes surrounding its production.

The second features ia new interview with executive producer Mel Brooks, producer Jonathan Sanger and former Brooksline development executive Randy Auerbach. Running around 15 minutes in length, the interviews are insightful and definitely worth watching, as they unveil a lot of details about the movie’s origins and production.

“The Doctor and the Devils” is a cool gothic horror film that offers a truly captivating story and bundles it with as much atmosphere as you could possibly ask for. Shout! Factory, who is releasing this Blu-Ray Disc as part of their Scream Factory label, has been doing a wonderful job on this release yet again, offering up a clean and highly detailed presentation of the movie that will have fans in stitches.