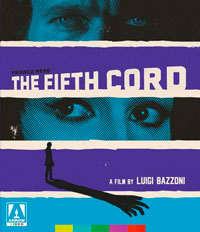 Among the number of movies that begged to be reviewed here on DVD Review in recent months, as an avid Italo-horror fan, there’s been one title in particular that I’ve had my eye on for a while. Way back in February, Arrow Video has produced a brand new high definition master of The Fifth Cord, also known as Giornata nera per l’ariete in its original.

The film was released theatrically back in 1971 in a likely attempt to ride the new-wave of giallo films that was initiated by the “Italian Hitchcock,” Dario Argento. Unfortunately though, unlike many of Argento’s movies, I wouldn’t quite say that this title has stood the test of time particularly well. In fact, until recently, it has been relatively difficult to procure a decent copy of the movie because it has only been available in standard definition in a, now outmoded, Blue Underground DVD release.

The Fifth Cord tells the aftermath of an unfortunate incident on New Year’s Eve. A young man en route to his home after having partied the night away, becomes the victim of a savage assault. Repeatedly clobbered over the head with a pipe, he is on death’s door. With authorities on the trail and the media in a mad frenzy, Andrea Bild (Franco Nero), an alcoholic journalist, is being assigned to report on the attack. However, as in all gialli plots, the further our protagonist digs into the case, the deeper and more twisted things become. I shall not spoil what exactly happens throughout the film, but I will reveal that it revolves around a sexual exploitation scheme, fingerless gloves, and Tuesdays.

Directed by Luigi Bazzoni who’s no stranger to the genre, as he previously directed the proto-giallo The Possessed (La donna del lago), a film which too has been officially re-released by Arrow in high definition, showcases competence in his style and direction throughout. To be perfectly honest with you, however, that is as far as I can go in terms of general praise because in all frankness, the movie is dull. For a film that’s only an hour and a half long it sure felt a lot longer due to the sluggish pacing and stretched plot. To put it simply, for the most part of the movie nothing happens!

I get the sense that although this movie manages to go through the checklist of giallo tropes, the people behind it didn’t quite understand how the genre actually works. For example, it is common in these movies for there to be a threatening phone call from the killer as a means of generating suspense for the audience, putting the main protagonist in imminent danger. While that call certainly came in this movie, it was lackluster and one never got the sense that Andrea was ever in any real danger both before and after the call. Andrea is always detached, emotionally, geographically and physically, from the killer’s actual murder spree. In fact, the only time he ever was in danger was during the climax, a scene in which he sets out to stop the killer, and not the other way around.

On that matter, it also becomes incredibly disappointing when those sparse moments of suspense end up as anticlimactic flatlines. None of the kills are particularly satisfying, which is truly a shame, especially when you look at other films in the genre. In The Bird With The Crystal Plumage, you have a woman violated down-under with a knife! In The Cat O’ Nine Tails, you have a victim is flattened by a train in truly spectacular fashion! What does theThe Fifth Cord offer up? An obese guy keeling over and dying from a heart attack in the middle of a chase… I truly wish I would be making this up as a joke to get your attention, but, no…

I am not sure exactly who is to blame for these decisions since the movie is supposedly based on a novel penned by David McDonald Devine. Admittedly, I have not read the novel, but I find it hard that these elements were as drab in the book. So did the screenwriters meddle with the material too much? Did the director lack proper vision? Did the studio drive certain aspects? No matter who is really to blame, the issue still remains and the movie still struggles throughout. It sort reached the point for me that I even stopped getting invested in the characters and simply began to look at everything else in the frame.

On that note, I want to say that The Fifth Cord is an absolutely gorgeous movie at times thanks to the work of future Oscar award-winning cinematographer Vittorio Storaro. In fact, you get the sense that each shot has been extensively designed, usually composing of surface reflections and choice lighting, and shot using all sorts of varying camera lenses in 35mm Technichrome. What this means, is that the movie lends itself to an incredibly elegant appearance that I find to be its biggest redeeming value.

Furthermore, the movie also has a truly decadent score by the renown Ennio Morricone to help complement the stylish visuals. I won’t say it is as particularly good as some of the other gialli scores he provided during this period, such as A Lizard In A Woman’s Skin, but it is by no means bad. The only real gripe I have to say is that it’s simply not as prevalent as I’d have liked it to be.

Moving away from the movie itself and onto the Arrow transfer itself, it’s quite an upgrade from the aforementioned standard definition Blue Underground master, making it the definitive way to watch the movie as of this writing. With it being a new 2K scan of the original negative, the movie looks even more stunning than ever before. Although I cannot comment on the accuracy to an original theatrical print, the colors are nicely saturated with both ends of the color spectrum appearing more vibrant than the Blue Underground version. It also looks quite better texturally, reproducing far more detail than ever before, with a pleasing amount of grain to underscore its grittiness, while skintones no longer look pasty.

In the audio department, things are also looking pretty good given the choice between the original Italian and English mono audio tracks, both presented in decent quality. As an added bonus to that, Arrow also provides separate subtitle tracks for each of the two tracks, allowing you to see the differences between dubs, as well even the original English and Italian opening credits composites. As always, Arrow provides a handful of extras worth checking out, such as an audio commentary track, a video essay on the film’s strong emphasis on style, a critical analysis on the movie as a giallo, interviews with the film’s editor and lead star, the original trailer in both English and Italian, and my personal favorite, a montage of scanned unused B-roll footage.

At the end of the day though, I would say this release is a bit of a mixed bag. Although I cannot find fault with anything regarding the Arrow master itself, as far as I know, the movie itself is not exactly worth the price tag for a full physical copy, unless you truly are a fan of the film itself. Thankfully though, the movie is available on several streaming services at a much cheaper price. All in all, I would say that this movie is worth checking out only if you are a huge gialli fan since I have a hard time really recommending this for anyone outside of that demographic. But don’t get me wrong though, if you are interested in checking it out, by all means, do so. Despite all of my bashing, the movie is far from the worst the genre has produced in my opinion and it is, in the very least, a mediocre way to kill some excess time.